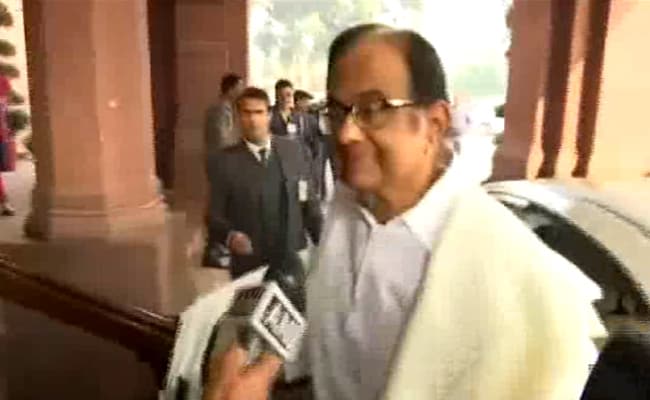 P Chidambaram was released after more than 100 days

Congress leader P Chidambaram is in parliament today, a day after he was granted bail by the Supreme Court in the INX Media money-laundering case. The former Union Minister walked out of jail on Wednesday after spending 105 days in prison, mostly in Delhi's Tihar Jail.

"Government cannot suppress my voice," he said this morning after he was told by the top court on Wednesday that he cannot make public remarks about the corruption case. He held a protest outside parliament on rising onion prices and took a jibe at

Here are the live updates of Parliament Winter Session:

Dec 05, 2019 15:26 (IST)
The government has spent Rs 193 crore to renovate and repair bungalows of MPs in the last four years, Lok Sabha was informed on Thursday. In a written response to a question, Union Housing and Urban Affairs Minister Hardeep Singh Puri said that there is no expenditure limit prescribed for such renovation and repair of residences of Members of Parliament by Central Public Works Department (CPWD).
Dec 05, 2019 15:26 (IST)
Lok Sabha Speaker Om Birla on Thursday said the states should come up with an action plan to curb the rising incidents of digital banking frauds in the country after a Member of Parliament raised the issue in the House. Raising the issue during the Zero Hour, Arvind Kumar Sharma of the ruling Bharatiya Janata Party (BJP) said on one hand the nation was moving towards Digital India while on the other hand, such fraudulent activities were taking place. "In digital banking, frauds are taking place through different apps like Paytm.... Every day frauds are taking place...and the police does not even register an FIR," he said.
Dec 05, 2019 15:25 (IST)
Under attack for her comment in Parliament stating that she did not eat onions Union Finance Minister Nirmala Sitharaman on Thursday said that her remark was taken "out of context." Ms Sitharaman's office tweeted a video of her speech "explaining in detail the steps taken by the government to control onion prices and provide relief to the common man".
Dec 05, 2019 15:24 (IST)
Congress To Oppose Citizenship Bill In Parliament, Says Rahul Gandhi
Congress leader Rahul Gandhi on Thursday said the party will oppose the contentious Citizenship (Amendment) Bill aimed at providing citizenship to non-Muslim refugees from Pakistan, Bangladesh, and Afghanistan. His statement comes as the contentious citizenship bill,
which has created strong resentment in the Northeastern states, is set to be tabled in Parliament.
The Union Cabinet on Wednesday had given its clearance to the draft law. "Congress party is against any form of discrimination against anybody in this country. So anybody who discriminates against anybody who is Indian, we are against them.
That is our line. We believe that India belongs to everybody-- all communities, all religions, all cultures," Mr Gandhi told reporters.
Dec 05, 2019 12:41 (IST)
The Rajya Sabha was adjourned till noon as the chairman disallowed the Opposition members, especially from the Samajwadi Party and the Congress, from raising issues not listed for Zero Hour. After laying papers and parliamentary standing committee reports in the Upper House, Chairman Venkaiah Naidu announced setting up of an informal group to look into Internet pornography issues and prepare a report within a month.
Dec 05, 2019 12:15 (IST)
Here Is The Parliament Schedule For Today
LOK SABHA
Bills for consideration and passing: The International Financial Services Centres Authority Bill, 2019.
RAJYA SABHA
Bill for consideration and return: The Taxation Laws (Amendment) Bill, 2019
Dec 05, 2019 12:15 (IST)
"Does She Eat Avocado?" P Chidambaram On Nirmala Sitharaman's Onion Remark
"Finance Minister said yesterday that she doesn't eat onions, so what does she eat? Does she eat avocado?" P Chidambaram was quoted as saying by news agency ANI.
Dec 05, 2019 11:17 (IST)
"Government cannot suppress my voice in parliament," says P Chidambaram outside Parliament.