The contentious Citizenship (amendment) Bill and the one on banning Triple Talaq are set to lapse on June 3 when the term of the present Lok Sabha ends as they could not be passed in the Rajya Sabha which adjourned indefinitely today. 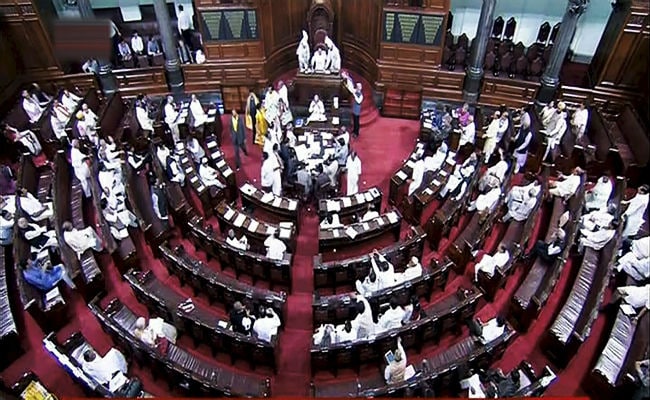 11 bills will be tabled in Rajya Sabha in the last day of the parliament budget session today, including the controversial Citizenship (Amendment) Bill 2016. Union law minister Ravi Shankar Prasad will move the Muslim Women (Protection Of Rights On Marriage) Bill, or the Triple Talaq bill, that the Prime Minister Narendra Modi-led government is keen to get parliamentary approval for. If these bills are not approved today, all bills introduced in Lok Sabha and not passed in Rajya Sabha will lapse. However, the government is trying to extend the upper house sitting by a day or two to complete the legislative business which includes a discussion on the budget and a few other bills.

Here are the highlights from today's parliament session:

Feb 13, 2019 16:55 (IST)
"Also, this is the first time.. when I realised the difference between an embrace and people trying to be clingy (gale lagna aur gale padna ) Also, the "Ankhon ki gustakhiyan" amused the media too: PM Modi's jibe at Rahul Gandhi
Feb 13, 2019 16:50 (IST)
There have been confrontations with Mallikarjun Kharge. I wish he was not having a bad throat today. Conversations with him helped me stir my thought process: PM Modi
Feb 13, 2019 16:47 (IST)
On all of the lawmakers, we were blamed that we decide our own remuneration. This time, we made sure that transparency was brought in. Lawmakers are not the sole decision makers when it comes to their remuneration. We have been freed of the criticism: PM Modi
Feb 13, 2019 16:43 (IST)
Over 1400 redundant laws were done away with: PM Modi
Feb 13, 2019 16:40 (IST)
It is this Lok Sabha that passed the GST. The GST process revealed the spirit of cooperation and bipartisanship: PM Modi
Feb 13, 2019 16:39 (IST)
It is this Lok Sabha that has passed stringent laws against corruption and black money: PM Modi
Feb 13, 2019 16:38 (IST)
A new aspect has emerged about the way India deals with foreign relations. This is about how we are very sensitive about human rights. Whether it's about earthquake in Nepal, water crisis in Maldives ... or similar issues with our neighbouring countries: PM Modi
Feb 13, 2019 16:33 (IST)
India is increasingly becoming self dependent. Make in India is one such step: PM Modi
Feb 13, 2019 16:32 (IST)
The world is discussing global warming and India made an effort in the form of the International Solar Alliance to mitigate this menace: PM Modi
Feb 13, 2019 16:30 (IST)
India has made its space in the digital world: PM Modi
Feb 13, 2019 16:29 (IST)
This is the first time that there are so many women ministers in cabinet. So many women overseeing security and a woman speaker: PM Modi
Feb 13, 2019 16:27 (IST)
There were at least 8 sessions that saw 100 per cent performance. On an average, as we bid farewell, the average performance has been 85 percent: PM Modi
Feb 13, 2019 16:26 (IST)
This is after three decades that the country saw a a government being formed with complete majority: PM Modi
Feb 13, 2019 16:23 (IST)
In 2014, I was among the parliamentarians who were in parliament for the first time: PM Modi
Feb 13, 2019 14:03 (IST)
The Lok Sabha has passed a bill to protect gullible investors from ponzi schemes, with Finance Minister Piyush Goyal saying the Government will ensure that no loophole is left while framing rules. The Banning of Unregulated Deposit Schemes Bill, 2018, seeks to put in place a mechanism by which such depositors can be compensated. It has incorporated recommendations of the Standing Committee on Finance. The bill was initially introduced in Parliament on July 18, 2018 and was referred to the Standing Committee on Finance.
Feb 13, 2019 13:53 (IST)
The productivity of the Lok Sabha during BJP rule was way above UPA II but slightly lower than the UPA I tenures. According to data for the entire 16th Lok Sabha session (barring the last few days) shared with news agency IANS by PRS Legislative Research, the productivity of the current Lok Sabha stands at 83 per cent (till February 6), way above the 63 per cent in UPA II and slightly less than 87 per cent in UPA I.
Feb 13, 2019 13:13 (IST)
The 13-day Budget session was a washout in the Rajya Sabha as Opposition parties stalled proceedings daily over issues ranging from Rafale fighter jet deal to Citizenship Bill.
Feb 13, 2019 13:12 (IST)
Parliament today approved the Modi Government's sixth and final Budget that gave Income Tax rebate to those earning up to Rs 5 lakh, an annual cash relief of Rs 6,000 to small farmers and pension for unorganised sector workers. While the Lok Sabha has passed the Appropriation Bills that gave Government authorisation of spending certain sums till the next government presents the full Budget for 2019-20, and the Finance Bill after full debate, the Rajya Sabha passed them without discussion today -- the last day of the session.
Feb 13, 2019 12:52 (IST)
The Rajya Sabha was adjourned indefinitely after it passed some Bills including Interim Budget and Finance Bill for 2019-20 without debate. Chairman M Venkaiah Naidu in his customary address at the close of the session said that precious time of the House was
lost in protests, stalling proceedings. The Budget Session of Parliament commenced on January 31.
Feb 13, 2019 12:27 (IST)
Rajya Sabha has passed Motion of Thanks on the President's Address, Interim Budget 2019-20, Appropriation bills and Finance bill without debate.
Feb 13, 2019 12:19 (IST)
The CAG (Comptroller and Auditor General) report on Rafale fighter jet deal, submitted to the Rajya Sabha today, does not include the controversial and key point of pricing, as the Defence Ministry maintained that these details could not be revealed. The parts in the report referring to cost are redacted, which may provoke fresh opposition attacks.
Feb 13, 2019 12:01 (IST)
The Rafale deal sealed by Prime Minister Narendra Modi's government is 2.8 per cent cheaper than the one negotiated by the previous Congress-led UPA government, says the report of the national auditor CAG accessed by NDTV. The Congress and other opposition parties have dismissed the report as biased because auditor Rajiv Mehrishi was Finance Secretary when the deal for 36 Rafale fighter jets was inked in 2016. The CAG report says compared to the 126-aircraft deal negotiated by the Congress-led government, India managed to save 17.08 per cent money for the India Specific Enhancements in the new contract.
Feb 13, 2019 11:51 (IST)
CAG report on Rafale has been tabled in Rajya Sabha today:

CAG report tabled in Rajya Sabha today: The delivery schedule of the first 18 Rafale aircraft is better than the one proposed in the 126 aircraft deal, by five months. #RafaleDealpic.twitter.com/9j3vE419sg

CAG report, tabled before Rajya Sabha today, says compared to the 126 aircraft deal, India managed to save 17.08% money for the India Specific Enhancements in the 36 Rafale contract. #RafaleDealpic.twitter.com/mFydI83Led 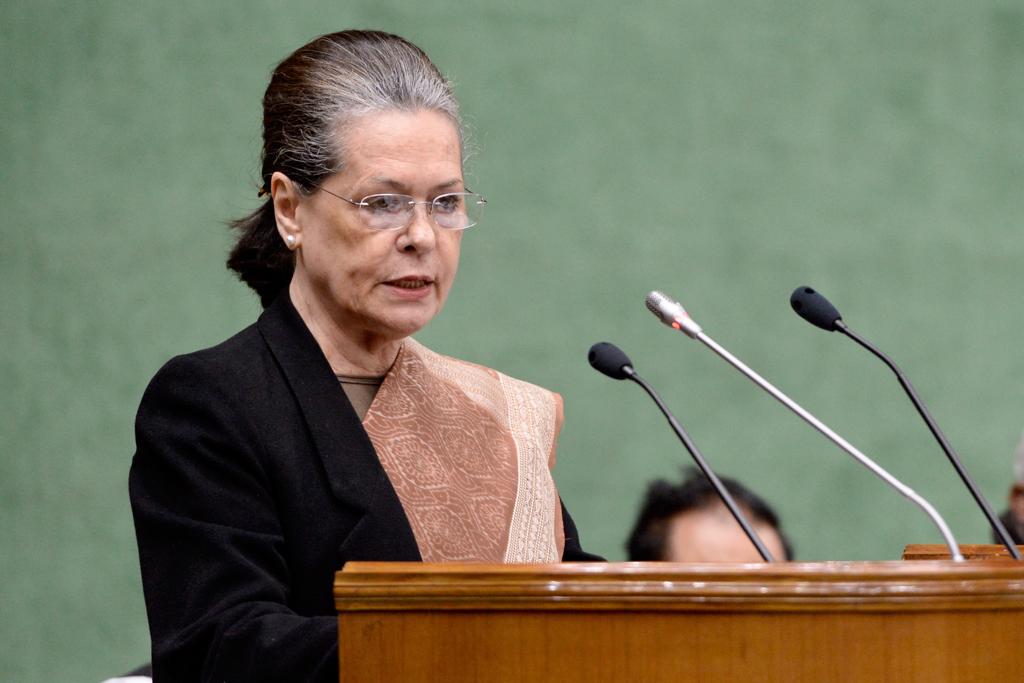 Copies of CAG report on #RafaleDeal brought to the parliament, it will be tabled today

Both Houses have been adjourned till 12 pm

Feb 13, 2019 11:27 (IST)
The Congress brought paper airplanes to the Parliament premises today with Prime Minister Narendra Modi's picture on one leaf and Anil Ambani's on the other to protest against the Centre over the Rafale issue. 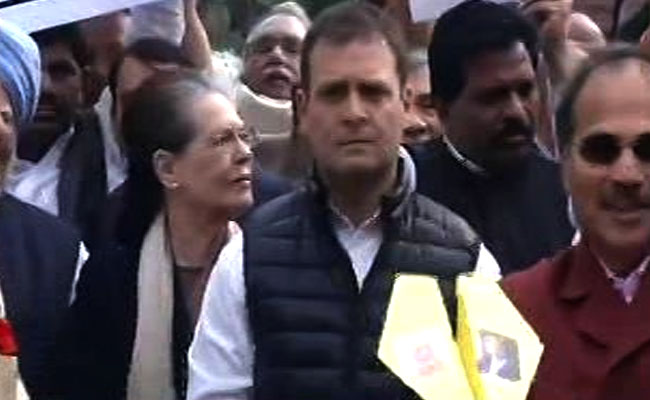 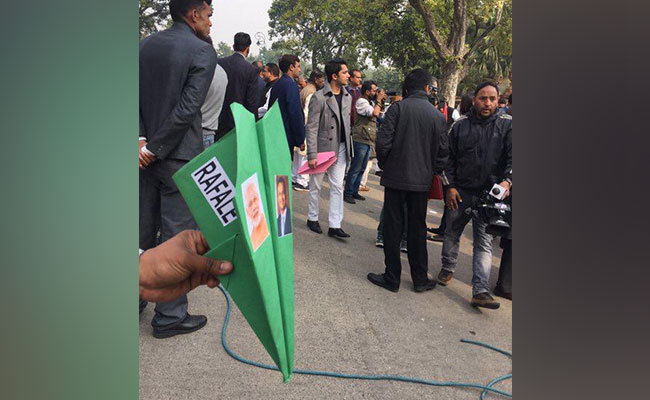 Feb 13, 2019 11:24 (IST)
Here are pictures from earlier today of CAG report on Rafale being brought to the Parliament. 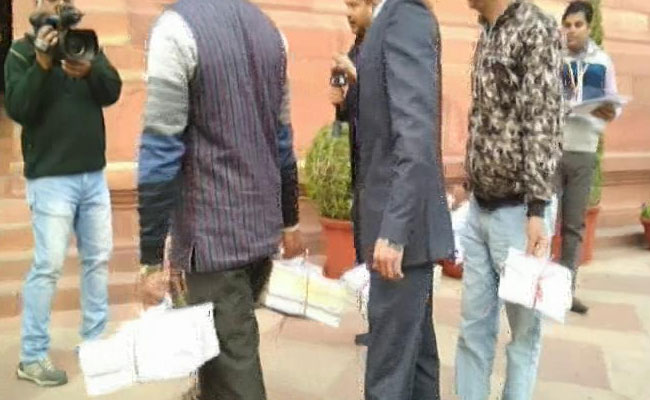 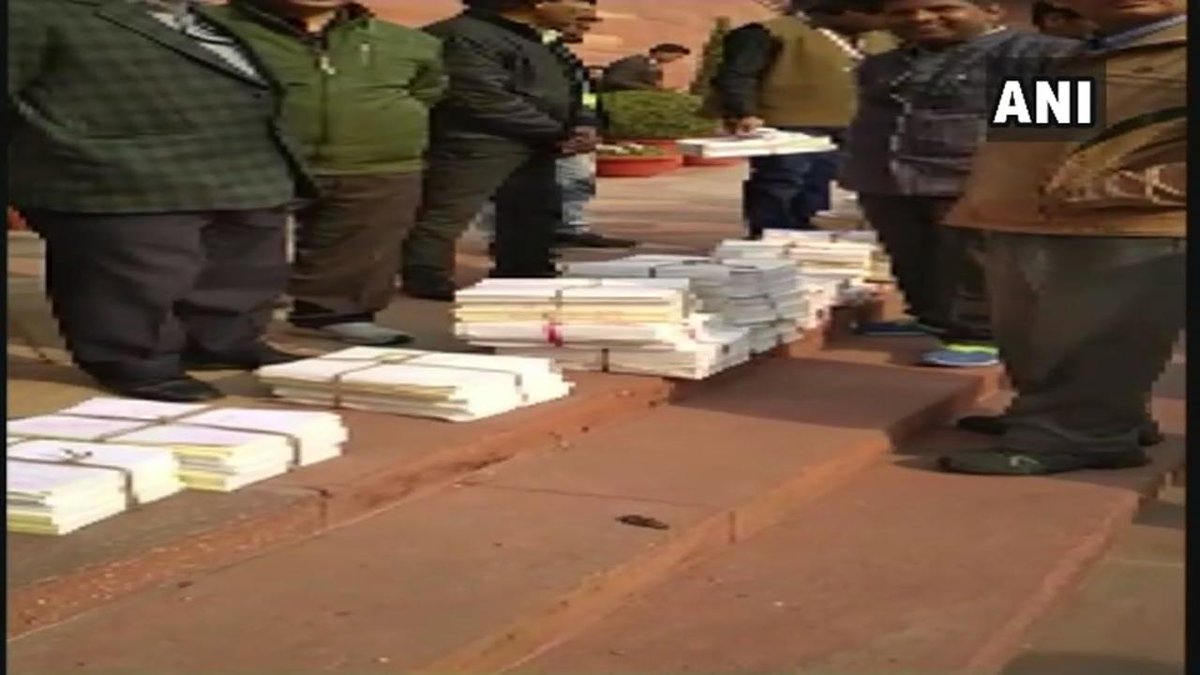 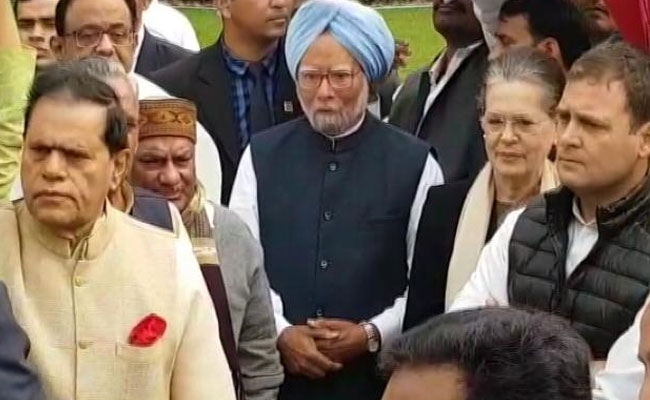 Feb 13, 2019 10:59 (IST)
Ahead of the last day of the Budget session today, lawmakers from the Telugu Desam Party protested in the Parliament premises, demanding special status to Andhra Pradesh. 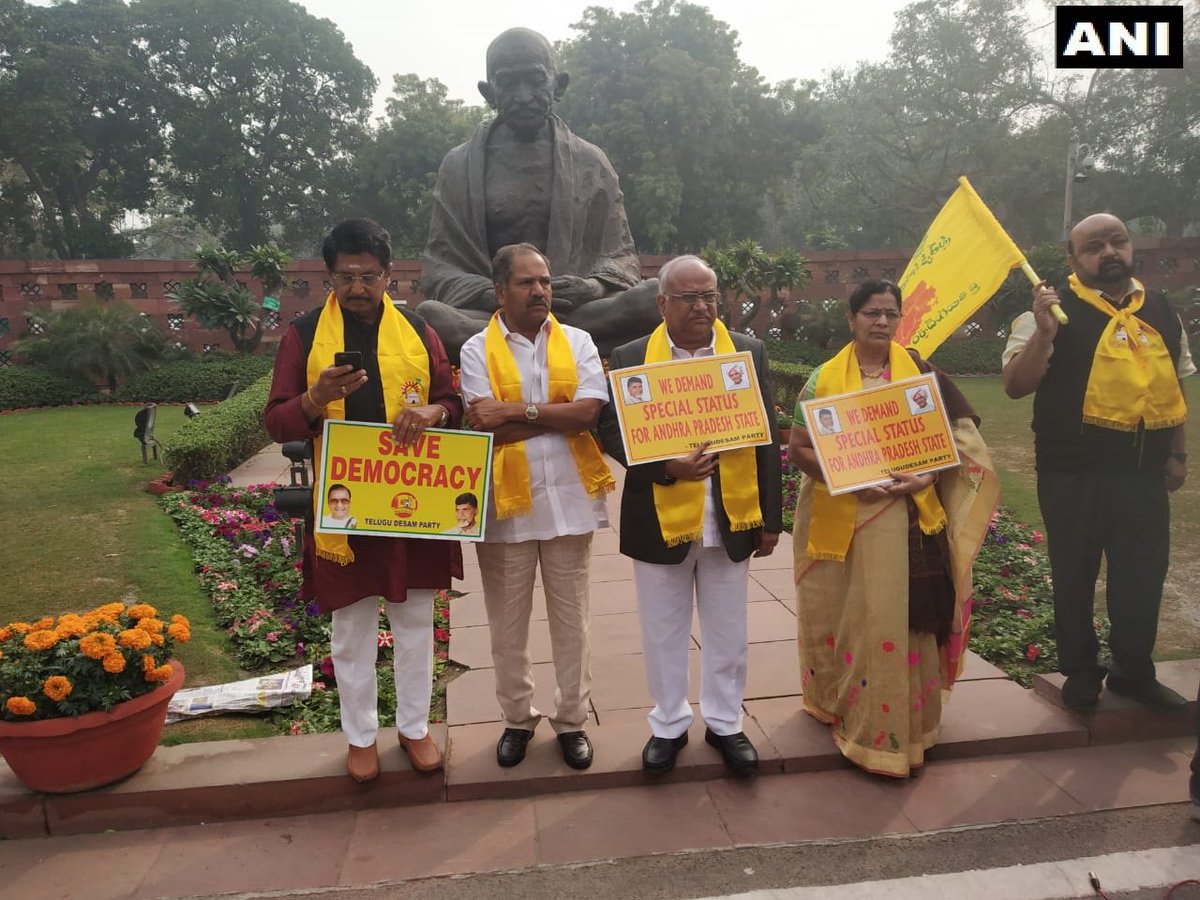 Feb 13, 2019 10:48 (IST)
Ahead of the last day of the Budget session today, lawmakers from the Trinamool Congress protested against the Prime Minister Narendra Modi-led Centre wearing black clothes in the Parliament premises. 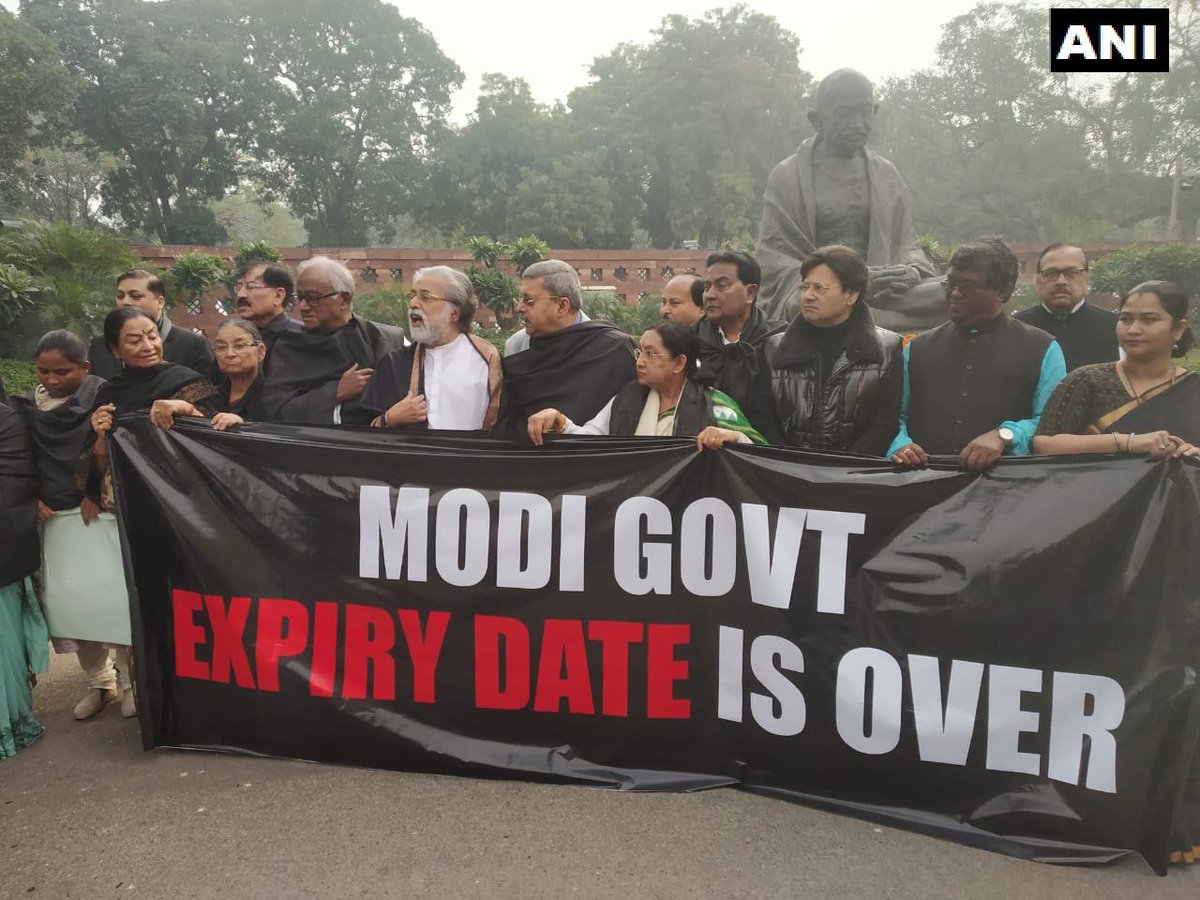