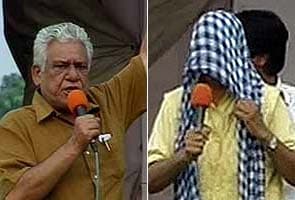 The notices were filed in both houses of parliament Monday even as Om Puri apologised for calling MPs "anpadh" (uneducated) and "nalayak" (incompetent) at the Ramlila Maidan during Hazare's fast last week.

Bedi expressed no regrets for poking fun at politicians who she alleged don "several masks" to deceive people.

MPs in both Rajya Sabha and the Lok Sabha have given notices against the two for the "derogatory and defamatory" comments.

"The matter is under my consideration. I have received notices on the question of privilege," she said in the Lok Sabha after she received the complaints.

Similar notices were also given in the Rajya Sabha where Deputy Chairman K. Rahman Khan said he would convey the sense of the house on the issue to Chairman Hamid Ansari.

If the notices are admitted, the privilege committee will quiz the accused and recommend action against them.

Mohammed Adeeb, an independent MP from Uttar Pradesh, said Bedi had mocked at parliamentarians by wrapping a scarf around her head and face.

"They say one thing inside the house and one thing outside. You remove one mask, then you find another one, and then another," she said, at the protest rally of Hazare last week.

Om Puri also launched a blistering attack on politicians from the stage at Ramlila Maidan. He told the thousands gathered that he feels "ashamed when an IAS or IPS officer salutes a ganwar (illiterate) who is a neta (political leader).

However, the 60-year-old actor later apologised and said he was ready to face any action by MPs. "If they are still angry with me, I will take whatever punishment they give me."