Pak Drone With Drugs Taken Down By Border Force In Punjab

Amritsar: BSF troops engaged the Pakistani drone by firing on it and also illuminated the area by firing illumination bombs, according to the border guarding force. 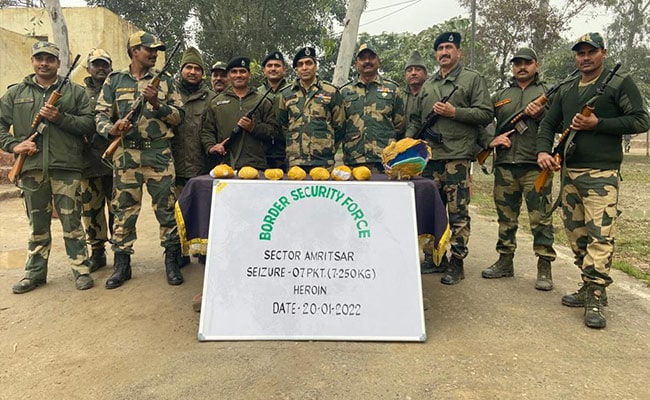 Amritsar: The BSF seized heroin over 7 kg dropped by the Pakistani drone in the area.

The Border Security Force (BSF) has foiled another attempt of smuggling of contraband by engaging a "flying object" coming from Pakistan in Punjab's Amritsar Sector and seized heroin over 7 kg dropped by it in the area.

The nefarious attempt of anti-national elements to smuggle contraband was thwarted by the BSF troops on the intervening night of Wednesday and Thursday.

"On the intervening night of 19/20th January 2022, alert BSF troops heard the humming sound of a flying object coming from Pakistan. Troops as per drill engaged the object by firing on it and also illuminated the area by firing illumination bombs. As per Standard Operating Procedure (SOP), all sister agencies were informed," said the BSF.

As the BSF troops heard the sound of dropping from the flying object, the BSF said, the area was cordoned and seven packets of suspected heroin were recovered from the area during a search operation conducted in the morning.

The gross weight of the heroin was approximately 7.250 kg, said the BSF, a border guarding force mandated to guard 3,323 km India-Pakistan border as well as curb illegal activities like smuggling of contraband and Fake Indian Currency Notes (FICN) among other activities.

"Vigilant BSF troops, despite adverse climatic conditions, once again foiled the nefarious attempts of anti-national elements to smuggle contraband. BSF is committed in the fight against drugs," the BSF further said.