"The drone is 8-feet wide from blade-to-blade and seems to have been controlled by a Pakistani picket opposite Panesar post of the BSF formation in Kathua sector," a police officer said

A drone carrying weapons near Kathua in Jammu and Kashmir was shot down by the Border Security Forces today, the police said. An American-origin M4 rifle, two magazines and ammunition have been recovered after shooting down the drone.

The police said it was another attempt by Pakistani forces to drop weapons for terrorists in the Union Territory.

"This delivery was meant for a terrorist, Ali Bhai. The payload was carrying his name," a senior police officer said.

"The drone is 8-feet wide from blade-to-blade and seems to have been controlled by a Pakistani picket opposite Panesar post of the BSF formation in Kathua sector," the officer said. 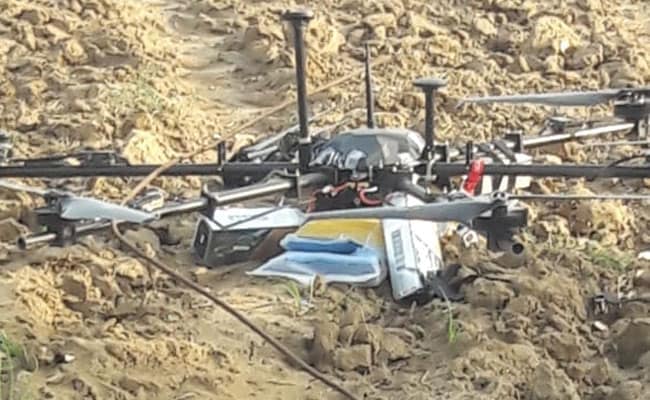 The Pakistani drone was carrying weapons to be given to terrorists

The drone was seen hovering in the skies by a BSF patrol at 5.10 am. The BSF personnel fired nine rounds at the drone that was flying 250 metres inside Indian territory.

The police said a few months ago weapons of the same make have been recovered from terrorists of the Jaish-e-Mohammed killed near Jammu region.

"These shameless acts by Pakistani agencies are aimed at arming Jaish terrorists active in Kashmir to carry out terrorist acts and disruption of peace and order," a police officer said.

"Similar attempts to smuggle weapons have been foiled earlier in other areas bordering Pakistan, especially in Kupwara, Rajouri and Jammu sectors," he said.