Pakistan Needs To Do Much More Against Terrorism, Says Venkaiah Naidu

Vice-President M Venkaiah Naidu said on the subject of terrorism, our thoughts naturally go to its contemporary epicentre -- Pakistan. 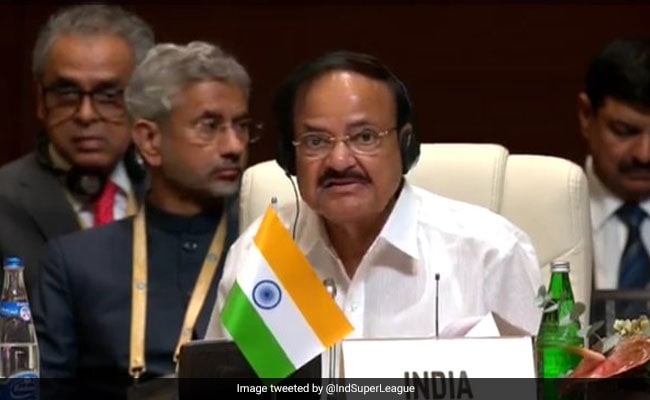 Describing Pakistan as the "contemporary epicentre" of terrorism, India said that it must decisively abjure terrorism for its own good, for that of its neighbours and for the good of the world.

Addressing the 18th Summit of the Non-Aligned Movement (NAM) in Azerbaijan, Vice-President M Venkaiah Naidu said terrorism is the single most destructive threat, not only to international peace and security, but to the very principles of the 120-member grouping.

"On the subject of terrorism, our thoughts naturally go to its contemporary epicentre -- Pakistan," Mr Naidu said.

The vice-president also expressed regret over the "misuse" of the forum to justify once again Pakistan's long-standing policy of conducting cross-border terrorism against its neighbours, including Jammu and Kashmir.

"Indeed, we speak for the larger region in terms of this deep concern over Pakistan's behaviour. All of us in the NAM are focused on meeting our developmental goals and aspirations. Pakistan clearly needs to do much more to earn the confidence of the international community. It must decisively abjure terrorism - for its own good, for that of its neighbours and for the good of the world," he said.

Paris-based Financial Action Task Force (FATF) last week gave a warning to Pakistan at its five-day plenary decided to again put the country on the "Grey List". The international terror financing watchdog warned Pakistan that it will be blacklisted if it does not control terror funding by February next, voicing serious concern over that country's failure to deliver on most of its 27 targets.

"The only way to fight this menace is to strengthen and implement, without exception, all existing international laws and mechanisms to combat terrorists and their enablers," he said, adding that there cannot be any justification for violent extremist ideologies and terrorist actions.

"I call upon all our NAM partners to come together to forge a common front against terror in all its forms. We must do this by stepping up inter-agency coordination, exchanging information, and strengthening the existing legal framework by endorsing the Comprehensive Convention on International Terrorism (CCIT) proposed by India in 1996. All this is really possible when we have a clear commitment to zero tolerance towards terrorism," Mr Naidu said.

India proposed the CCIT in 1996 to strengthen the existing legal frameworks.

"Today we are faced with serious challenges of an interdependent world. Globalisation and unprecedented technological advances are shaping the 21st century in unpredictable and often disruptive ways. As we all strive to ensure inclusive and sustainable growth and a better future for our peoples, we must realise that our destinies are linked like never before," he said.

Mr Naidu said the NAM countries need to work together to uphold the global order and respect for international law. "Our movement was created to provide a platform for autonomy of policy for newly independent and developing nations, an objective that remains relevant today. We should demonstrate the strength of unity in diversity by pursuing a focused positive long-term agenda."

The NAM, which was formed in 1961 at the height of the Cold War as an independent forum of countries that were not formally aligned with or against any major power bloc, now has 120 member countries.