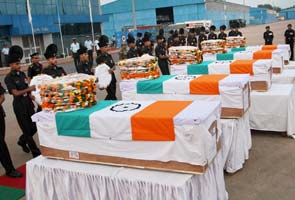 New Delhi: After being attacked by the Opposition for letting Pakistan off the hook for the deadly ambush on five Indian soldiers in Kashmir this week, Defence Minister AK Antony today issued a new statement on the attack in Parliament, and indicted the Pakistani Army.

The minister said that "specialist troops" of the Pakistani Army were responsible for the killings.

"We all know nothing happens along the Line of Control without the support...direct involvement of the Pak Army," he said. Leader of the Opposition Sushma Swaraj said she welcomes his new statement, suggesting a possible end to the huge stand-off between her party and the government over Mr Antony's original assessment of how the Indians were killed.

The opposition demanded first an apology and then a revised statement from Mr Antony, who on Wednesday, stopped short of blaming the Pakistani army and attributed the assault to "men in Pakistani army uniforms."

The Defence Minister was contradicted by his own ministry, whose statement directly attributed the attack to the Pakistani Army. That press release was later withdrawn, and the Defence Ministry and army said that the minister's account was correct.

The opposition said that the minister had "given Pakistan a clean chit" and had forced the army to censor the facts. Today's account by the minister is based, he said, on inputs from Army Chief General Bikram Singh who visited Kashmir yesterday.

Promoted
Listen to the latest songs, only on JioSaavn.com
The government has been keen to prevent the crisis from derailing attempts to revive peace talks with Pakistan. The BJP's senior leaders warned the Prime Minister at a meeting on Wednesday evening that "the country is not in the mood to see him embrace Nawaz Sharif," the newly-elected Prime Minister of Pakistan.

The two leaders were expected to meet on the sidelines of the UN General Assembly in New York next month.