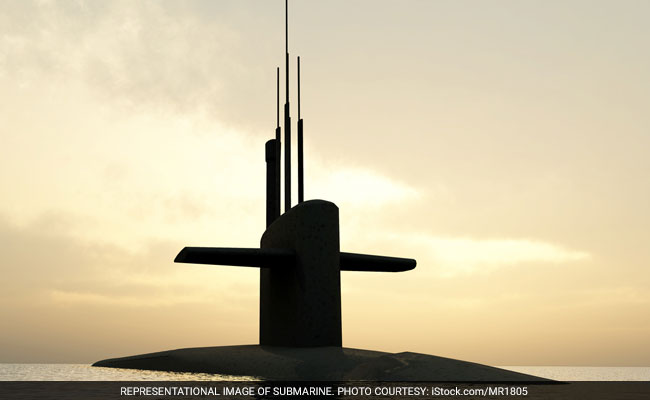 Pakistan said it had detected an Indian Navy submarine "south of the Pakistani coast".

New Delhi: India has denied that one of its submarines was detected and stopped from entering Pakistani waters, a claim made today in Islamabad.

The submarine was detected "south of the Pakistani coast" on Monday, the Pakistan navy said in a press release.

"Thereafter, despite the submarine's desperate efforts to escape detection, it was continuously tracked by Pakistan Navy Fleet units and pushed well clear of our waters," the press release said.

Pakistani also released footage and photographs of what it was said was the submarine trying to enter Pakistani waters.

Pakistan has failed to identify the type of submarine they claim to have intercepted. Analysis of photos and images of the video released by Pakistan does not indicate that the mast of the submarine (visible in the images) matches the mast of either India's German -designed HDW submarines, its Russian kilo-class submarines or its Russian Akula-class nuclear attack submarine, the Chakra.

Pakistan is "capable of giving a fitting response to any sort of aggression (by India)", a Pakistani navy spokesperson said on a local TV channel. He alleged that India is "trying to station its submarines in Pakistani waters". Commodore (Retd) Syed M. Obaidullah, commenting on the incident, told Geo TV that the Indian submarine was headed towards the Balochistan coast.

Pakistan accuses India of instigating the massive insurgency in the northwest province of Balochistan.

Tension between India and Pakistan has spiked to the worst in over a decade after terrorists attacked an army camp in Uri in Kashmir in September, leaving 19 soldiers dead. India retaliated by sending troops across the Line of Control to target terrorist staging areas in Pakistan-Occupied Kashmir. Islamabad denies the cross-border raids.

Heavy shelling and firing across the de-facto border has forced villagers on both sides to evacuate their homes and move into state-run shelters. Earlier this week, Pakistan said seven of its soldiers had been killed overnight in firing from India.
Comments
Pakistani watersIndian submarinesIndian NavyPakistanIndian Submarine