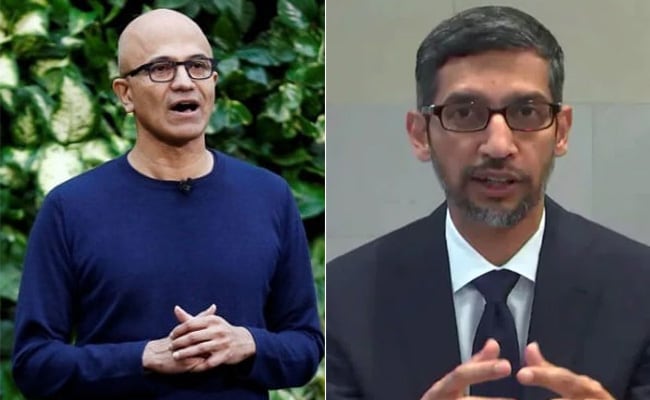 Satya Nadella and Sundar Pichai are among the Padma Bhushan awardees.

Microsoft CEO Satya Nadella and Google's Sundar Pichai are among the 17 Padma Bhushan awardees this year.

Padma Bhushan is the third-highest civilian award in India after Bharat Ratna and Padma Vibhushan.

The Padma honours are given for exceptional service in different fields - art, social work, public affairs, science and engineering, trade and industry, medicine, literature and education, sports, and civil service.

Indian-American business executives - Mr Nadella, 54, and Mr Pichai, 49 - have been honoured for their contribution in the "trade and industry" category.

General Bipin Rawat, India's first Chief of Defence Staff who died last month in a chopper crash in Tamil Nadu along with his wife and 12 others, has been awarded Padma Vibhushan.

Vaccine makers Serum Institute of India's Cyrus Poonawalla and Bharat Biotech duo - Krishna Ella and Suchitra Ella - have been honoured with Padma Bhushan. The vaccines developed by the two firms - Covishield and Covaxin - gave a much-needed boost to the country in the fight against the pandemic.

One hundred and seven personalities are on the list of Padma Shri awardees, including singer Sonu Nigam and Olympian gold-medallist Neeraj Chopra. Padma Sri is the fourth-highest civilian award.

The government revealed the name of the awardees a day before the Republic Day celebrations in line with the annual traditions.

A total of 128 personalities are on this year's list of Padma honours.