"Chidambaram Joins Coveted Club," BJP Jibes After He Gets Bail

Former Finance Minister and Congress leader P Chidambaram, 74, was ordered to be released on bail today after spending more than 100 days in custody in connection with the INX Media case 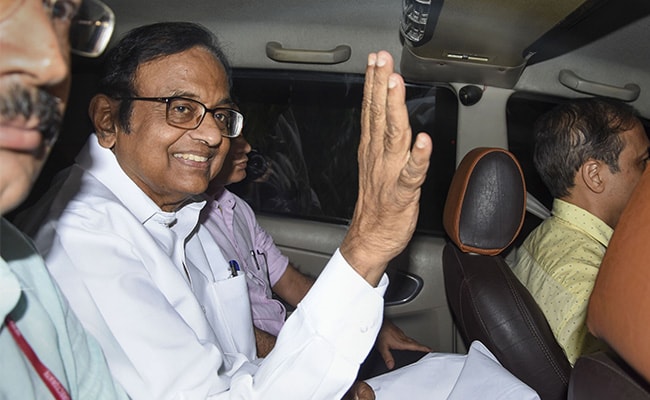 The BJP hit out at Congress leader P Chidambaram and his party this morning, after the former Finance Minister was granted bail by the Supreme Court in connection with the INX Media case. BJP National spokesperson Sambit Patra, responding to news that Mr Chidambaram had been granted bail, congratulated him on joining the "coveted Out On Bail Club". Reacting to the bail order he went on to name other Congress leaders - like Sonia Gandhi and Rahul Gandhi - who are also out on bail in connection with other cases.

Shortly after Mr Patra retweeted the Congress' tweet - the party said "truth finally prevails" - and called it a "classic case" of celebrating corruption.

"Classic case of @INCIndia 'Celebrating Corruption'!! So finally Chidambaram too joins the long list of 'OOBC (Out On Bail Club)' in the Congress. He joins the coveted Club, some members of which are: 1) Sonia Gandhi 2) Rahul Gandhi 3) Robert Vadra 4) Motilal Vohra 5) Bhupinder Hooda 6) S(h)ashi Tharoor Etc Etc," Sambit Patra said on Twitter.

So finally Chidambaram too joins the long list of “OOBC(Out On Bail Club)” in the Congress ..He joins the coveted Club,some members of which are:
1)Sonia Gandhi
2)Rahul Gandhi
3)Robert Vadra
4)Motilal Vohra
5)Bhupinder Hooda
6)Sashi Tharoor
Etc Etc https://t.co/VPVxcqzv4H

P Chidambaram, 74, was released on bail today after spending more than 100 days in custody. In its order, a three-member Supreme Court bench, headed by Justice R Banumathi granted bail that had been denied by the Delhi High Court last month.

His release was celebrated by both the party and his son, Karti Chidambaram, who tweeted: "Phew. At last after 106 days" with a smiley at the end.

In the brief hearing that began at around 10.30 am the Supreme Court criticised the High Court for making observations on the merits of the case and noted that the "triple test" was found in the politician's favour - that he was not absconding, not tampering with evidence and cooperating with investigators.

During arguments in the top court, the Enforcement Directorate (ED) had claimed Mr Chidambaram continues to have "substantial influence" on crucial witnesses in the case even from the custody. Mr Chidambaram argued that the agency cannot "destroy" his career and reputation by making baseless allegations.

Mr Chidambaram was arrested on August 21 by the Central Bureau of Investigation (CBI), which is investigating allegations that as Finance Minister of the country in 2007, he facilitated a huge infusion of foreign funds into the company INX Media founded by Peter and Indrani Mukerjea.