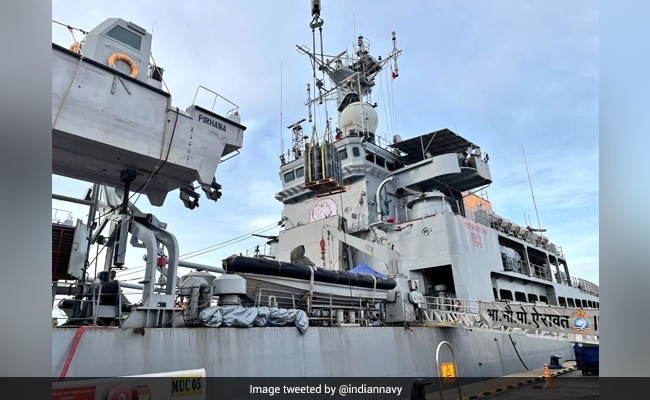 The Navy has intensified Operation Samudra Setu-2 to fetch more liquid oxygen and other medical supplies from abroad as the second Covid wave continues to ravage the country amid acute shortages of the life-saving gas and essential drugs. Nine warships from all three Naval Commands have been deployed to bring the relief material from friendly foreign countries in Persian Gulf and south-east Asia.

"The deployment of nine warships as part of Operation Samudra Setu II forms a part of the multiple lines of effort, by the Government of India and the Indian Navy to supplement the oxygen requirement in the country," the Navy said in a statement.

It added that INS Kolkata, which is carrying two 27-tonne oxygen tanks, 400 cylinders and 47 oxygen concentrators, has today left Kuwait for India.

Four warships are enroute Qatar and Kuwait to bring nine 27-tonne tanks and over 1,500 oxygen cylinders back home.

INS Shardul of the Southern Naval Command is on its way to bring three liquid oxygen-filled cryogenic containers from Persian Gulf.

Experts say the actual levels of daily deaths due to the virus could be way higher than the official figures as large numbers of fatalities have been taking place outside hospitals.

The heavy caseloads have also created a paucity of hospital beds across the country. Many patients in the worst Covid-hit states reportedly died as they could not get medical attention or oxygen support in time.

Many countries, including the UK, the United States and France, have rushed in aid to help India control the rapidly escalating situation.