Organisers Of Farmers' "Mahapanchayat" Have Political Motives: UP BJP 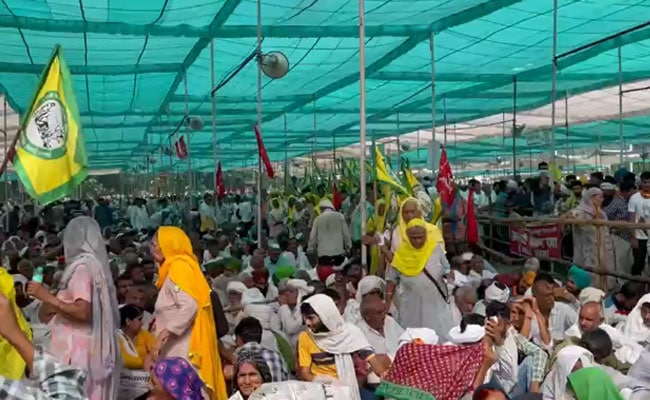 Farmers are protesting against the laws for the past over nine months.

The Uttar Pradesh BJP on Sunday accused organisers of the farmers' congregation in Muzaffarnagar of having political motives and claimed that the event was attended by workers of parties brought from other states.

Thousands of farmers from Uttar Pradesh and neighbouring states gathered at Muzaffarnagar on Sunday for the "Kisan Mahapanchayat" organised by the Samyukt Kisan Morcha (SKM) to protest the Centre's controversial farm laws.

Farmers are protesting against the laws for the past over nine months.

Commenting over the congregation, UP BJP spokesperson Alok Awasthi claimed that the Centre and the UP government are working for farmers and those who attended the event were not genuine farmers.

"Political workers from Punjab and Haryana were brought for the event. They (organisers) are using farmers only for their political interest. It is the Centre and the UP government that are actually working for the welfare of farmers," claimed Mr Awasthi.

"The genuine farmer is working in the field and not taking part in protests. It is because of this that there has been high production of various crops in the state," he further said.

Meanwhile, Lucknow-based Rashtriya Kisan Manch's president Shekhar Dixit said the "mahapanchayat" will prove to be the "last nail in the coffin of the arrogant BJP government".

"The attitude of the BJP government towards farmers has been bad. Instead of addressing their problems and grievances, step-motherly treatment has been extended to them," he said, stressing that farmers are ready to take on the government.

Priyanka Gupta, a leader of the UP Congress, said the government must have got its answer from the crowd in Muzaffarnagar.

"The government wants to destroy agriculture. The government should try to understand problems of farmers. The gulf between farmers and the government, which claims to be a phone's call away, has increased significantly," she said.

Meanwhile, speaking at the "mahapanchayat", Yogendra Yadav said not only the venue for the event but also the city like Muzaffarnagar seems small for the congregation.

Renowned social activist Medha Patkar while addressing the gathering said, "Today, Muzaffarnagar has not come to indulge in ''danga'' (riot) but to take ''panga'' (confrontation) with the Modi government."

"If you are successful, the country will be saved. We know that those who raise the issue of Ayodhya, spread ''andhtatva'' (blindness) in the name of ''Hindutva''. On the issue of ''asmita'' (identity), they ignore the issue of ''astitva'' (existence) of farmers," she added.

They are not only breaking the Parliament House, they are damaging democracy and its foundation, she alleged referring to the Centre's Central Vista Redevelopment Project.