A senior police official said returnees were being sent to their respective districts in Tamil Nadu through specially arranged government buses and they have been advised to remain in home quarantine for two weeks. 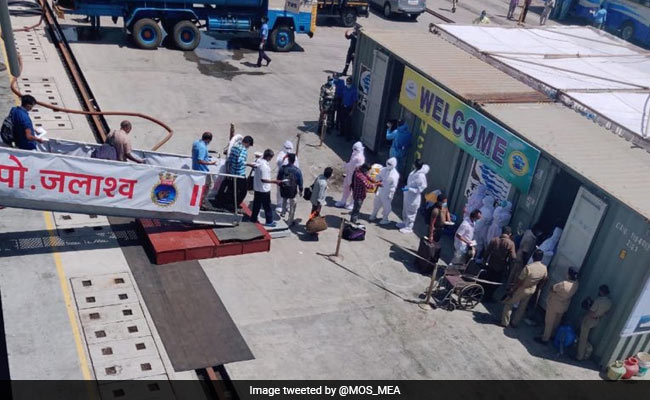 Nearly 700 Indians, mostly hailing from Tamil Nadu, arrived in Tuticorin today by naval warship "INS Jalashwa" from Sri Lanka, where they were stranded due to COVID-19 linked international travel restrictions.

Also, 169 men arrived in Chennai by a Gulf Air flight from Dammam in Saudi Arabia and were accommodated in hotels and the premises of an education institution in the state capital as part of quarantine measures for returnees, Chennai airport sources said.

As soon as the passengers disembarked here, they were thermal screened and their baggage disinfected by health workers in protective gear, V O Chidambaranar Port Trust and
district police authorities said.

According to VOC Port Trust, nearly 700 people, including crew, arrived here as per schedule and 675 passengers belong to Tamil Nadu, and 10 others belong to states, including neighbouring Kerala.

A total of 685 passengers- 553 men, 125 women and seven children arrived, according to defence sources.

A chunk of the returnees were stranded tourists, some fishermen and workers and there were others under categories like "short-term visa holders faced with expiry of visas," according to the port.

A senior police official said returnees were being sent to their respective districts in Tamil Nadu through specially arranged government buses and they have been advised to remain in home quarantine for two weeks.

Respective district health authorities will take swab samples from returnees from their houses as per protocol, he said.

None of the returnees had flu like symptoms during screening on arrival and facilitation was made for those belonging to other states as well to reach their respective destinations, he added.

Participating in the third phase of Navy's mission to bring back Indian citizens stranded abroad, it had reached Colombo on Monday morning.

The Indian Navy, under its ambitious "Operation Samudra Setu" programme, had safely repatriated nearly 1,500 Indian nationals from the Maldives in first two phases in its two vessels- INS Jalashwa and INS Magar on May 10, May 12 and May 17.

This was part of the centre's initiative to repatriate stranded Indians in foreign countries through air and sea routes.