INS Jalashwa To Bring Back 700 Indians From Sri Lanka Today 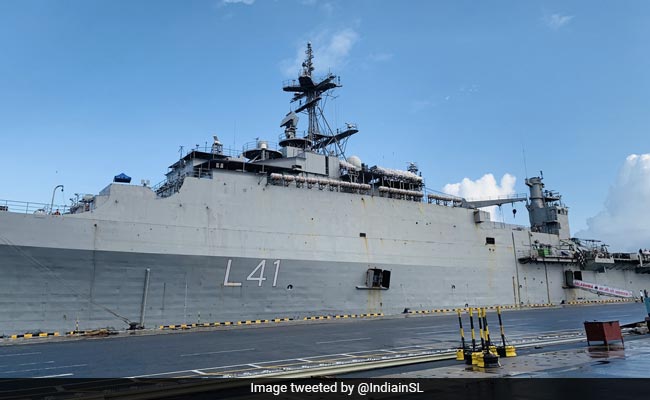 Indian Navy ship INS Jalashwa will sail from Colombo Port today to bring back 700 stranded Indians under the second phase of Operation ''Samudra Setu'' as a part of the "Vande Bharat" mission.

Catering to the present requirements of maintaining social distancing and health protocols the ship is divided specifically into three zones-- red, orange and green.

Commander Gaurav Durgapal, Executive Officer on INS Jalashwa told ANI: "The guidelines for safety against COVID-19 and the protocols for the same are being promulgated by the naval headquarters and the commands respectively."

"The entire ship for the purpose of evacuation has been divided into three zones. The red zone is the area where we plan to accommodate all the evacuees. The orange zone is a place with a team dedicated to taking care of the people being evacuated and the Green zone is where officers and sailors are staying," he said.

High Commission & @indiannavy teams ready to assist the passengers.
A big thank you to SriLankan authorities for their cooperation in #SamudraSetu#VandeBharatMission@MEAIndia@IndianDiplomacy@COVIDNewsByMIB@MFA_SriLanka#lka#SriLankapic.twitter.com/O4LtE720Tc

Apart from adhering to social distancing, evacuees are subjected to the requisite medical screening and those asymptomatic have been allowed to embark.

Those being repatriated are provided with a new mask at the time of boarding followed by a new mask each day till they reach Tuticorin. Hand sanitizers are available at the help desk and medical desk for the evacuees.

Sailors and officers would be wearing personal protective equipment (PPE) kits. Strict protocols are also being followed while removing the PPE kit.

"Our primary goal is to provide the evacuees' accommodations that are disinfected fully. A process of deep cleaning is also being maintained while strictly following the guidelines given by naval headquarters," said Commander Durgapal.

The Operation Samudra Setu under Vande Bharat Mission has so far facilitated over 1000 evacuees from Male during the operations between May 8 and May 16.

Taking to Twitter, High Commission of India in Sri Lanka tweeted: "A happy & bright morning @ColomboPort. #INSJalashwa is the ''Fearless Pioneer'' ready to take 700 stranded Indians back to their homeland from #SriLanka. This is INS Jalashwa''s 3rd voyage under #SamudraSetu Previously she carried to India nearly 1400 Indians stranded in Maldives."

"Evacuation is being carried out against the complicated scenario of COVID-19. The primary challenge is to ensure that evacuees maintain adequate distance among themselves. We have a team specifically to ensure social distancing among the evacuees. In the first two evacuations, the evacuees gave encouraging feedbacks that boost our moral responsibility" commander Durgapal said.

As a part of the phase II of naval repatriation exercise, INS Jalashwa would voyage on evacuation missions to Male (Maldives) and Bandar Abbas (Iran).