The former Uttar Pradesh chief minister also said the samajwadis had taken a historic decision in the run-up to the 2019 Lok Sabha polls. 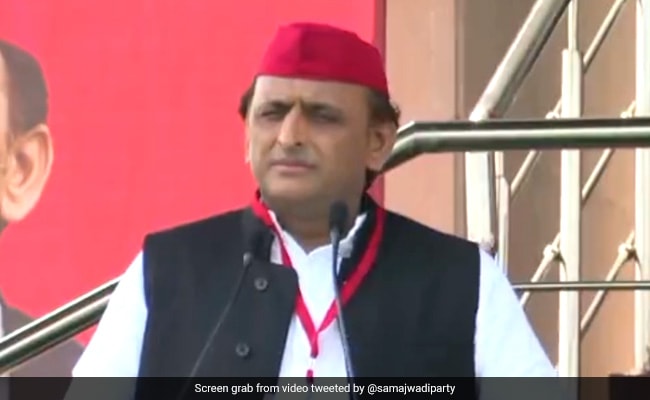 Akhilesh Yadav said that SP worked hard to win the UP assembly polls.

Samajwadi Party (SP) chief Akhilesh Yadav today said though recent poll results have not been favourable for them, it has been proved that only his party can defeat the ruling BJP in Uttar Pradesh.

He said the SP worked hard to win the Uttar Pradesh Assembly polls held earlier in the year but "those in power used every trick, misused the official machinery and we did not succeed".

The former Uttar Pradesh chief minister also said the samajwadis had taken a historic decision in the run-up to the 2019 Lok Sabha polls.

"We tried to realise the dream of Ram Manohar Lohia and B R Ambedkar of bringing the Bahujan forces on one platform, but those in power misused the official machinery and we failed," Mr Yadav said after inaugurating the ninth state-level convention of his party .

"Though the election results for the alliance between samajwadis and bahujanwadis have not been favourable, it has been proved that only our party can defeat the BJP in Uttar Pradesh," he asserted.

Mr Yadav said the SP had formed an alliance for the Assembly polls in an attempt to bring all those struggling to remove the BJP from power together.

"I can say one thing that despite the experiments of 2019 and 2022, the manner in which our leaders and workers worked, the samajwadis have come to know that despite not getting success, if there is anyone who can compete with and defeat the BJP, it is us," Mr Yadav said.

The SP contested the 2019 Lok Sabha election in an alliance with "arch rival" Bahujan Samaj Party (BSP), but managed to win only 15 seats (five to the SP, 10 to the BSP).

Soon after, the parties parted ways, with BSP president Mayawati continuously attacking the SP and its chief on various issues.

For the Assembly polls, the SP forged an alliance with smaller parties but failed to stop the march of the Bharatiya Janata Party (BJP).

Ahead of the 2024 Lok Sabha polls, political circles are abuzz about the chances of unity among the opposition parties on the initiative of Bihar Chief Minister Nitish Kumar.

The Janata Dal (United) chief, who dumped the BJP in Bihar to join hands with the Rashtriya Janata Dal (RJD), the Congress and Left parties to form the government, has emerged as the new hope of the Opposition to stop the saffron party from coming to power at the Centre for the third time in a row in 2024.

In the Uttar Pradesh polls held in February-March, the SP failed to stop the BJP from coming back to power in the state for a second consecutive time, a feat repeated in the politically significant state after more than three decades.

With the Congress and the BSP decimated in the election, the SP, which won 111 seats in the 403-member Assembly, made it clear that the next round of poll battle in the state would be between it and the saffron party.

At the convention, Naresh Uttam Patel was elected as the state president of the SP for the second time in a row.

Announcing his election unopposed, election officer Ram Gopal Yadav said the names of the state executive members of the party will be announced by its president.

The SP's move is being seen as an attempt to consolidate the numerically-significant backward class voters to rally behind the party.

The national president of the SP will be elected at the convention on Thursday. There is a strong possibility that Akhilesh Yadav will be re-elected to the post.

Congratulating Mr Patel, Mr Yadav said, "We will face the challenges that come up together." Patel hails from the OBC Kurmi caste, which has a sizable presence in many parts of the most populous state in the country, particularly in Bundelkhand.

Mr Yadav alleged that the BJP has failed on all fronts and said whenever his party got a chance to rule the state, it worked for the betterment of people.

The former Uttar Pradesh chief minister claimed that no work was done in the state after the days of the SP government. The poor are not getting treatment today as there are no facilities at the hospitals of Uttar Pradesh, he said.

Mr Yadav said the government has failed to create jobs and alleged that it deliberately wants to leave the "Bahujan samaj" behind by tampering with the rights that have been given to them by the Constitution.

Political and economic resolutions were also passed at the conference.