Only 4 Videos Of Self On Accused Woman's Phone, Punjab Cop Tells NDTV

The students of Chandigarh University have refused to accept the police findings that there is no prima facie evidence that the student had taken obscene videos of other women at the hostel bathroom. 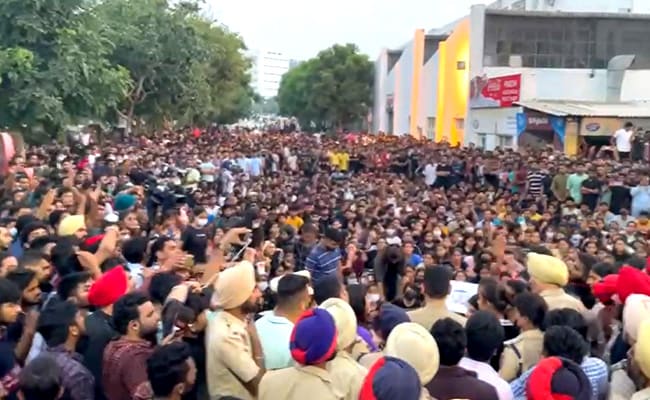 Fresh protests at Chandigarh University that started this afternoon, continued till late evening.

Only four videos have been found in the phone of the woman student accused of taking and releasing obscene videos of girls at the hostel of the Chandigarh University in Punjab's Mohali. But all these are of this woman which she sent to her boyfriend, Mohali's top police officer Navreet  Singh Virk has told NDTV. There has been no suicide attempt at the University as is being claimed by the protesting students. The videos they claim are being circulated, are yet to be found, he added.

The students at the Chandigarh University have refused to accept the police findings that there is no prima facie evidence that the student had taken obscene videos of other women at the hostel bathroom. Fresh protests that started this afternoon, continued till late evening.

"There is a rumor that cellphone videos of 60 girls have been made but we did not find any... We are asking the students to send us any of the videos that are being allegedly circulated," Mr Virk told NDTV. But none has been forthcoming.

The police have, however, arrested the accused girl and her boyfriend, a resident of Shimla. Twenty-three-year-old Sunny Mehta works at a travel agency. A second man, who works at a bakery, has also been arrested. His role is not clear yet.

The police have also announced a probe by a Special Investigation Team and are conducting forensic investigations on the woman's phone to recover deleted videos if any.

They are also investigating around the bathrooms, where the woman allegedly filmed other students from under the door, Mr Virk told NDTV.

The police, he added, are also checking a video of the accused woman being questioned by the warden of the hostel.

Protests are being held at the University campus since yesterday after some students expressed concern that a woman student had filmed them and circulated the videos on social media. Three or four women students claimed they spotted her taking photos in the common washroom from underneath the door, the police said.