Mohan Bhagwat was speaking at a centenary programme of the Vidarbha Sahitya Sangh, a Marathi literary body, in Nagpur. 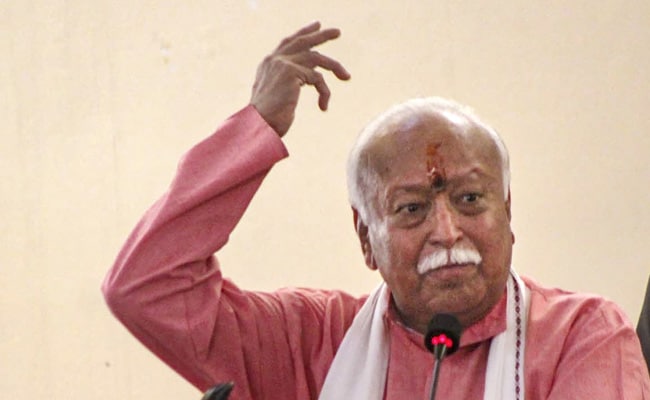 RSS Chief Mohan Bhagwat was speaking at an event in Nagpur. (File)

One leader can not face all the challenges before this country and a single organization or party can not bring about change, Rashtriya Swayamsevak Sangh (RSS) chief Mohan Bhagwat said on Tuesday.

This thought was at the base of the Sangh's ideology, he said, adding that the country got independence only when the common people took to the street.

Mohan Bhagwat was speaking at a centenary programme of the Vidarbha Sahitya Sangh, a Marathi literary body, in Nagpur.

"One thing at the base of the Sangh's ideology is that a single leader is not supposed to tackle all the challenges before this country. He can not even do that. Howsoever big the leader may be," the RSS chief said.

"One organization, one party, one leader can not bring about change. They help bring it. Change takes place when the common man stands up for it," he added.

India's freedom struggle began way back in 1857, but it succeeded only when there was a massive awareness and "the common man took to the street," Mr Bhagwat said.

The revolutionaries too contributed to the freedom struggle and Subhas Chandra Bose created a huge challenge before the British, but the main thing was that people acquired courage, he said.

"Not everyone went to jail, some people stayed away, but there was a widespread feeling that the country must become independent," the RSS chief said.

The RSS wants the Hindu society to become capable of fulfilling its responsibility, he said, adding that "leaders do not make society" but society creates leaders.

"All things take place through a change in society and the RSS is organizing society," Mr Bhagwat said.

People should not give the "contract" to improve the country's condition to others but should take up the responsibility themselves, he said.

"Don't give this contract to even the Sangh. Do your job yourself....people will have to learn this," Mr Bhagwat said.