One By One, The Children Slipped Away: Foreign Media On Gorakhpur

At least 30 children died Thursday night and into Friday at a hospital in Uttar Pradesh after its supply of liquid oxygen was disrupted over an unpaid bill, a home ministry said. 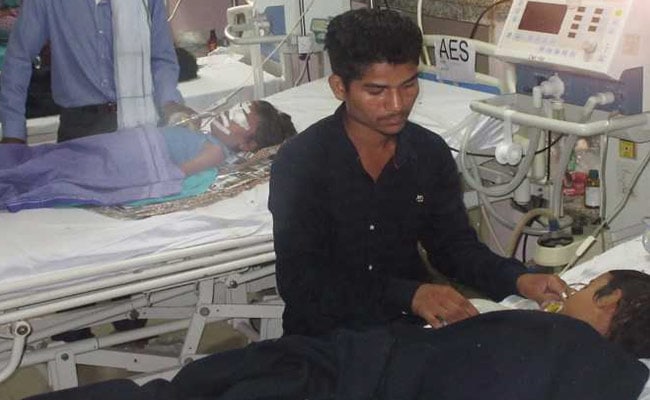 NEW DELHI: One by one, the infants and children slipped away Thursday night, their parents watching helplessly as oxygen supplies at the government hospital ran dangerously low.

At least 30 children died Thursday and into Friday at a hospital in the northern Indian state of Uttar Pradesh after its supply of liquid oxygen was disrupted over an unpaid bill, officials said. A home ministry spokesman told the Press Trust of India, citing police reports, that 21 of the deaths were directly linked a shortage of oxygen.

Witnesses described a chaotic scene between 11 p.m. and 2 a.m. as medical practitioners and relatives - the tanks running dry - handed out manual resuscitator bags to families in a desperate attempt to save the young patients.

"We saw children dying around us," said the father of one victim, who gave his name only as Vijay. "Obviously, it's the hospital's fault. So many children have died because of them. My son was fine until nighttime, then something wrong happened."

Two more children died Saturday at the Baba Raghav Das Medical College hospital in Gorakhpur, an impoverished area in the eastern part of the state, as authorities scrambled to firm up supplementary supplies and investigate the tragedy. The government suspended the medical college principal Saturday.

The state's health minister and hospital officials have denied charges that the deaths were caused by the oxygen bill dispute. An estimated 60 children have died at the hospital since Aug. 7 from a variety of causes, officials said.

In a news conference Saturday, the state's chief minister, Yogi Adityanath, called the tragedy despicable and said the state had set up a committee to investigate the role of the oxygen vendor.
"The guilty will not be spared," Adityanath said.

Parents of the victims described feelings of anger and bewilderment over the incident, saying they were struggling with guilt over not being able to save their children.

"The idea is devastating - that she had to suffer while trying to breathe," said Manger Rajbhar, the father of a 5-day-old girl who died in the chaos.

The deaths provoked widespread outrage and condemnation across the political spectrum and on social media, where a political cartoon spread that showed the babies as little angels hovering in the sky as an Indian government official tries to reach them.

"30 kids died in hospital without oxygen. This is not a tragedy. It's a massacre," Indian Nobel Peace Prize winner Kailash Satyarthi, a child advocate, said in a tweet. "Is this what 70 years of freedom means for our children?" (The country is set to celebrate the 70th anniversary of its independence from Britain on Tuesday.)

The hospital owed $89,750 to a Lucknow-based medical supply company called Pushpa Sales Private Limited, documents obtained by The Washington Post show, and the firm had written letters to the hospital and district magistrate for the past six months demanding payment. The company asserted that the hospital was violating the terms of its contract by running a balance of more than $15,625. The agreement expired July 31, and Pushpa discontinued the oxygen supply Aug. 4.

On Thursday, employees who handled the storage plant that pipes the oxygen wrote to the hospital's chief medical officer to warn him that supplies were low and would last only until Thursday evening, according to a letter obtained by the news channel NDTV. The oxygen supply then dipped to a critical level, the channel said.

State officials claimed they had obtained sufficient backup supplies from nearby nursing homes.

The hospital is in Adityanath's parliamentary constituency. The controversial monk, who was tapped by the governing Bharatiya Janata Party to head Uttar Pradesh earlier this year, is the longtime head of a large temple there.

Adityanath had visited the hospital this week to inaugurate a new critical-care unit. Many of the young patients were suffering from encephalitis, a potentially deadly illness that causes acute swelling of the brain. The disease is often spread by mosquitoes, and infections rise during the monsoon season.

Zahid Ali, the father of a 5-year-old girl suffering from encephalitis, said he and other family members were still in shock after the death of his daughter Khushi on Friday night.

Ali said Khushi, who was running a high fever, had been admitted to the hospital's encephalitis ward Thursday. She was responding to treatment while on oxygen, he said, but her condition deteriorated as the cylinders ran dry that night.

Hospital staff gave the parents a manual resuscitator and asked them to pump it themselves, he said, and he watched in horror as his daughter first became breathless, then turned "stiff and cold."

Promoted
Listen to the latest songs, only on JioSaavn.com
"At that time, I understood that my daughter was gone, but doctors kept on telling me that she is still alive," he said. She was pronounced dead several hours later.