In Odisha, a temple priest places his foot over the heads of the devotees to bless them. After being "blessed" by the priest's foot, some of the devotees are seen cleaning their heads. 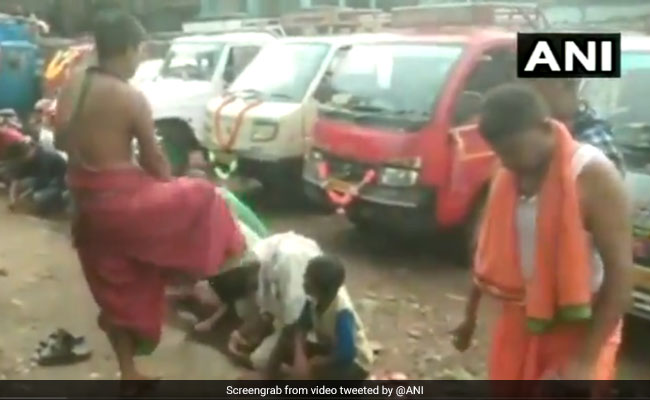 A dozen people are seen squatting on a busy road in a video from Odisha as a temple priest walks by them, placing his foot on their heads to "bless" them. The video, shared by news agency ANI, was shot on Vijayadashami, a big Hindu festival that was celebrated at the end of Navratri, on Tuesday.

After being "blessed" by the priest's foot, while some of the devotees are seen cleaning their heads, others are seen bowing down to him in reverence. Watch the video here:

#WATCH A temple priest gives blessings to people by putting his foot on their heads on #VijayaDashami (8th October), in Banpur area of Khordha, #Odishapic.twitter.com/1LxpnnfPqP

The video, filmed in the state's Banpur area in Khorda district, around 60 km from state capital Puri, has got a range of reactions from people online.

"Crazy people getting blessings from crazier priest," writes a user on Twitter. Another user questions the blind faith of the people - "India should ban these kind of radical blind faith.. This presents bad image of India in the world.."

A user who claims to live in Banpur calls it an "ugly exception".

"I have not seen this type of Ashirbad! in Odisha Banpur as I live here, this is an ugly exception. It's unfair to generalise rituals done in this way only. I was shocked to believe this from Banpur and so the video recorder. If you understand odia you can heard it," he wrote.