The DMK also invited Sonia Gandhi and Rahul Gandhi for the inauguration ofM Karunanidhi's statue in Chennai on December 16. 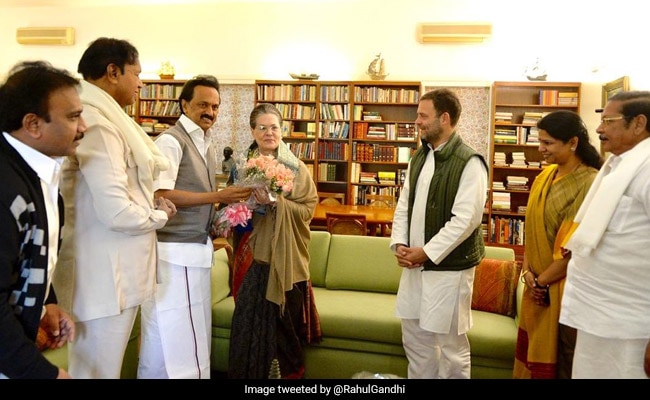 UPA chairperson Sonia Gandhi was greeted by leaders from across the political spectrum on her birthday, a day before the crucial meeting of opposition parties in Delhi. Mrs Gandhi turns 72 today.

Among the opposition leaders were DMK president MK Stalin, M Kanimozhi and A Raja who called on Mrs Gandhi. Her son Rahul tweeted a picture of Mr Stalin greeting her with a bouquet of peach roses.

The DMK also invited Mrs Gandhi and Rahul Gandhi for the inauguration of M Karunanidhi's statue in Chennai on December 16, according to news agency ANI

Shri Stalin & senior members of the DMK, visited Sonia Ji in Delhi today, to wish her on her birthday. We had a warm & cordial meeting & discussed a range of issues. I look forward to continuing our dialogue & to strengthening our alliance, that has stood the test of time. pic.twitter.com/Cdg0deyfQG

Like every year, Congress workers celebrated outside 10 Janpath, her home in central Delhi. Top Congress leaders wished her on Twitter.

My best wishes on your birthday Sonia Gandhi Ji. I pray for your long life and happiness in all you do

I extend my heartiest greetings to UPA Chairperson Hon'ble Smt.Sonia Gandhi Ji on her birthday. Your exemplary vision, sacrifices & leadership have always guided the nation. You are an inspiration for all. May God bless you long & healthy life ahead!#HappyBirthdaySoniaGandhi

National Conference leader Omar Abdullah too joined the chorus and tweeted his wishes.

Here's wishing Sonia Gandhi ji a very happy birthday, good health & a long life in the service of the nation. Many happy returns of the day ma'am.

Prime Minister Narendra Modi wished her on Twitter. "Best wishes to Smt. Sonia Gandhi Ji on her birthday. I pray for her long and healthy life," PM Modi tweeted.

A meeting of opposition parties to discuss a grand alliance against the BJP for the 2019 national elections is scheduled for Monday. Sonia Gandhi, Rahul Gandhi, MK Stalin, Tejashwi Yadav and Chandrababu Naidu are among the leaders who are expected to attend.

The meeting also comes just ahead of parliament's winter session, seen as the opposition's last chance to take on the government in the house. The opposition is likely to raise several issues such as the Rafale deal, distress in farm sector, and working of the CBI.

Mrs Gandhi, who has been facing health issues, did not campaign actively for the recently-concluded elections. She attended only one public meeting in Telangana last month.

Sonia Gandhi was born in 1946 in Lusiana, Italy. She has been the longest serving president of the Congress and headed the party for 19 years before Rahul Gandhi succeeded her last year.

She was married to former prime minister Rajiv Gandhi, who was assassinated in 1991.