In Tribute, Priyanka Gandhi Tweets What She "Learned" From Her Father

Priyanka Gandhi Vadra's brother, former Congress president Rahul Gandhi, also posted a message on social media, describing his father as both a "patriot" and "a loving father who taught me never to hate" 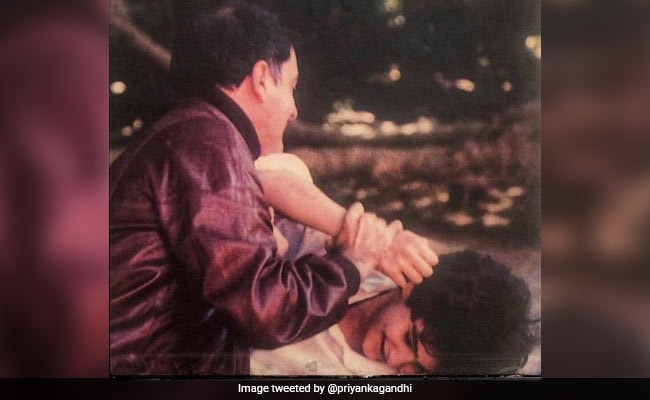 Priyanka Gandhi posted an emotional tribute to her father, Rajiv Gandhi, on his 75th birth anniversary

Priyanka Gandhi Vadra has posted an emotional tribute to her father, former Prime Minister Rajiv Gandhi, on the occasion of his 75th birth anniversary, revealing that he taught her "to listen to people's stories... and keep walking no matter how difficult the path might be". The Congress leader also posted a short poem by American poet EE Cummings with a throwback photo of herself and Rajiv Gandhi.

From my father, I learned how to listen to people's stories and find a place in my heart for them no matter how contrary to mine they might be.

From him, I learned how to keep smiling and keep walking no matter how difficult the path might be.#RajivGandhi75#SadbhavanaDiwaspic.twitter.com/O4W8d9cUL5

Ms Gandhi Vadra's brother, Rahul Gandhi, also posted today, describing his father as both a "patriot" and "a loving father who taught me never to hate".

To me, he was a loving father who taught me never to hate, to forgive & to love all beings. #Rajiv75#SadbhavanaDiwaspic.twitter.com/gaozH8h06r

Tributes to our former PM Shri Rajiv Gandhi on his birth anniversary.

PM Modi had been heavily criticised during campaigning for national elections earlier this year, after referring to Rajiv Gandhi as ''Bhrashtachari No 1 (corrupt number 1)" at a rally in Uttar Pradesh.

On Monday, Ms Gandhi Vadra's brother, Rahul Gandhi had posted another tribute, highlighting the Information Technology revolution as one of Rajiv Gandhi's many "incredible achievements".

He also said the Congress had planned memorial events across the country to mark the occasion.

This week we will celebrate my father, Rajiv Gandhi Ji's 75th birth anniversary with memorial events across India.

To honour him, each day this week, I will draw attention to one of his many incredible achievements. Today, the Information Technology revolution. #RajivGandhi75pic.twitter.com/qBjIfTVRkj

Rajiv Gandhi, the nation's sixth Prime Minister, became the youngest to hold the post when he was sworn in at the age of 40, after the 1984 assassination of his mother, former Prime Minister Indira Gandhi.

In May, 1991, he was assassinated in Sriperumbudur in Tamil Nadu, while campaigning ahead of national polls. His death anniversary is observed as Anti-Terrorism Day.