Four online sessions for MPs have been organised by the Lok Sabha and Pragya Thakur is to address one of them. The schedule was sent to all MPs yesterday. 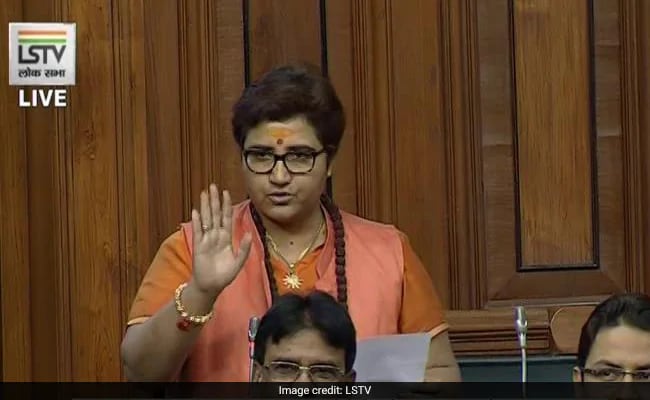 Pragya Thakur is an accused in the 2008 Malegaon blasts and out on bail. (File photo)

BJP MP Pragya Thakur's session with MPs on Monday to mark the International Yoga Day has provoked fierce protests from the opposition Congress, with a leader questioning whether Prime Minister Narendra Modi "has changed his mind" on the controversial parliamentarian.

Four online sessions for MPs have been organised by the Lok Sabha and Pragya Thakur is to address one of them. The schedule was sent to all MPs yesterday.

Congress MP Manickam Tagore raised his objections in a tweet.

"Had Modi sahib changed his heart on Pragya Thakur? On PM's pet Project on the Yoga Day now she will be the chief guest for all MPs shows the mann se maaf (forgiven from the heart)," Mr Tagore said, referencing a phrase that PM Modi had used in 2019 while denouncing Pragya Thakur's comments glorifying Mahatma Gandhi's assassin Nathuram Godse as a "patriot" during her campaign in the national election.

PM Modi had been asked by a reporter on a BJP candidate praising Gandhi's killer. "The comments on Gandhi and Godse are terrible, despicable, condemnable, this sort of mentality is not for civilised society. Those who do this should think 100 times in future. She has apologized, that's fine. Lekin main apne man se maaf nahin kar paoonga. (But I cannot forgive her from my heart)," the Prime Minister had said.

Pragya Thakur went on to win the election, defeating Congress veteran Digvijaya Singh in Bhopal. She has also made several provocative statements since then, and has rarely been told off by the BJP.

After her Godse comments, Pragya Thakur was also removed from a parliamentary panel on defence and kept out of BJP parliamentary meetings.

Pragya Thakur is an accused in the 2008 Malegaon blasts and out on bail. Six people were killed and over 100 others injured when an explosive device strapped on a motorcycle went off near a mosque in Malegaon, a town about 200 km from Mumbai in north Maharashtra.

She has skipped hearings before a special court in the case citing health problems.