Amit Shah visited Shantiniketan, where he paid homage to Rabindranath Tagore at Rabindra Bhavan on the university campus 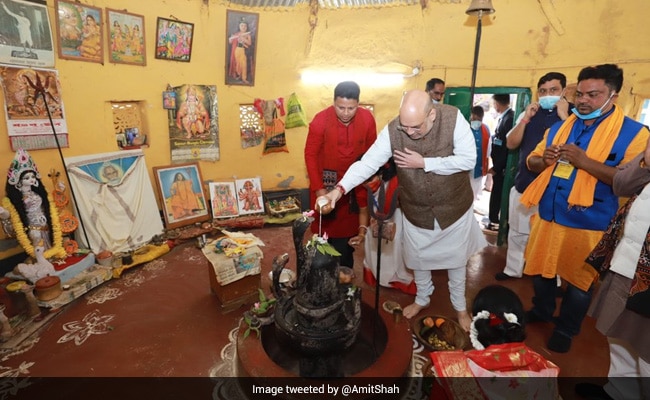 A chunk of Union Home Minister Amit Shah's Day 2 in Bengal was devoted to removing the "outsider" tag bestowed on the BJP by Chief Minister Mamata Banerjee. The former BJP chief, architect of a string of electoral victories starting with the 2014 general elections, picked Shantiniketan as the centrepiece of his Day 2 in Bengal.

Shantiniketan's Visva Bharati University was set up in 1921 by Nobel laureate Rabindranath Tagore, an icon of the state and the university and its surroundings comprise one of the biggest cultural hubs of the state.

Mr Shah, whose party has been perennially targeting the young voters, visited the university where he paid respects to the poet and visited several iconic buildings on the campus. Easily the most iconic is the Upasana Griha, a prayer room made of coloured Belgian glass built by Tagore's father in the 1860s.

At mid-day he visited the home of a Baul singer. The Baul folk tradition, which focuses on the welfare of humanity, beyond caste and creed, is an area of pride for the state and today, many of these wandering minstrels have settled in an around Shantiniketan.

At the home of Basudeb Das Baul, Mr Shah and his entourage had lunch -- a sumptuous vegetarian fare comprising Bengal's famous rasgulla, tomato chutney, and a dish made from potato and poppy seeds. There was 'nolen gurer payesh' as well, a dessert made of milk, rice and date jaggery.

Bengal has been the big challenge for Mr Shah, who had set the state BJP unit a target of 200 of the 294 seats after the party's big victory in the northeast.
Mamata Banerjee had initially responded to the BJP challenge with disdain, labelling them outsiders who do not know much of Bengal and hence unfit to govern it.

While she and her Trinamool Congress built on it over the years, she lost a chunk of her local leaders -- including Suvendu Adhikari -- to the BJP yesterday.

Mr AdhikarI, who had walked out of the ruling Trinamool earlier this week, had derided this brand of politics as shallow.
Bengal is part of India and "people coming from other states can't be treated as outsiders", he had said, adding, "For us, we are first Indians and then Bengalis.

The Trinamool's stance hardened as the BJP roped in eight ministers from the Centre and states to focus on campaigning in Bengal. The party has accused the Trinamool Congress of creating and nurturing a culture of violence -- accusations the ruling party has vehemently denied.