The Ram temple issue - which made headlines on Sunday after the right-wing Vishwa Hindu Parishad and the BJP ally Shiv Sena held programmes in Ayodhya on Sunday -- found resonance in Rajasthan as Prime Minister Narendra Modi took it up to attack the Congress. The party, he said, had wanted the court to put brakes on the case for the 2019 elections. To achieve their objective, they created an "atmosphere of fear", threatening the Chief Justice with impeachment, he said.

In a tweet later, he underscored the point. "New tricks of the Congress: Send lawyers to the Rajya Sabha. Obstruct key legislation. Armtwist the courts. And, if a Judge does not give verdicts they like then bully them with impeachment threats. Congress' black deeds will not succeed till I am here," the tweet read.

The Prime Minister's comment came amid demands to fast-track the construction of the Ram temple. With the title suit pending in the Supreme Court, there have been calls for an ordinance or executive order from the government to bypass courts and begin construction at the disputed site in Ayodhya.

The temple issue came front and centre with some sections in the BJP and right-wing groups demanding that the construction begin before next year's general elections. Shiv Sena, which held a rally in Ayodhya, has accused the BJP of reducing the issue to an election gimmick. On Sunday, Sena chief Uddhav Thackeray warned the BJP that they would not remain in power if they don't start construction. 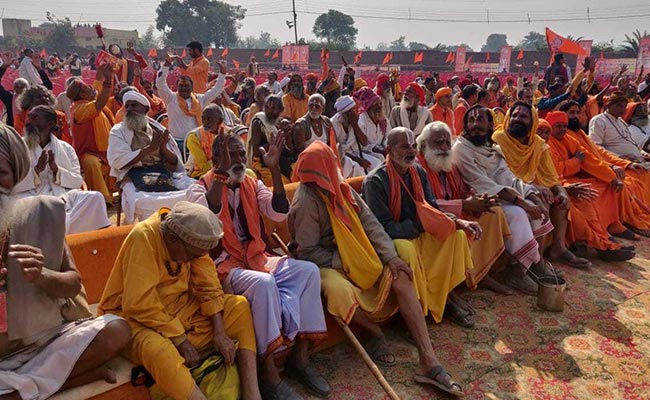 Right-wing group Vishwa Hindu Parishad and BJP ally Shiv Sena are holding parallel programmes in Ayodhya on Sunday, demanding that the government fast-track the construction of the Ram temple

So far, no senior minister in PM Modi's cabinet has commented on the matter. At an election rally in Alwar on Sunday, the Prime Minister accused the Congress of politicising the justice system.

"The Congress creates an atmosphere of fear for the judiciary. They tell the Supreme Court to delay the Ayodhya hearing due to 2019 elections. They do everything possible to impeach the Chief Justice.

How can such things be accepted," he added in what was seen as a reference to the opposition bid to start impeachment proceedings against former Chief Justice Dipak Misra earlier this year.

The Ayodhya title suit is pending in the Supreme Court, and in January, the court is expected to decide when it wants to hear the case. In October, the top court had refused to give an early hearing to the case, saying "we have our own priorities".

Chief Justice Ranjan Gogoi, who replaced Justice Misra weeks before, said an "appropriate bench" would decide when to take up daily hearings, indicating that he may not even be one of the judges deciding on the dispute.