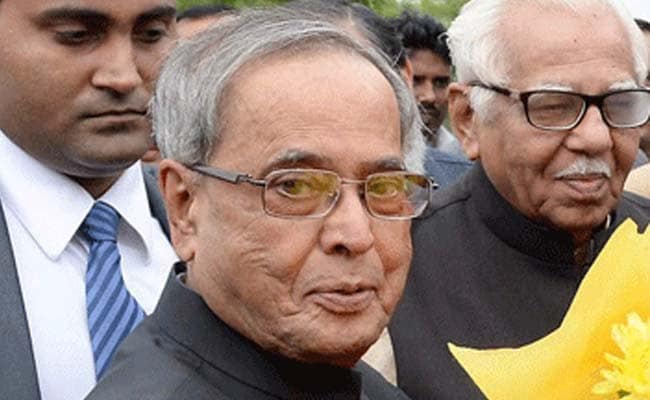 New Delhi: Rare paintings, classic artifacts and furniture make up a collection of "priceless pieces" which President Pranab Mukherjee is set to unveil for the public today on the occasion on his 79th birthday.

The President will also unveil a number of infrastructure and educational programmes for the benefit of the residents of the President's Estate as part of a people-oriented approach which he had adopted after entering the first office of the country.

"In about one-and-a-half months' time, we have restored treasured paintings lying in the store rooms of Rashtrapati Bhavan to decorate the cultural centre here. These priceless pieces must be showcased to the world," said Omita Paul, Secretary to the President of India.

Shedding light on a few of the restored pieces, Ms Paul said they include a painting by the famous Polish artist Feliks Topolski which uncannily foreshadows Mahatma Gandhi's assassination. Also among the exhibits are the arm-chairs used by the first President, Dr Rajendra Prasad.

These pieces will be showcased through the newly constructed integrated facility of Rashtrapati Bhavan's cultural centre.

"An electronic art catalogue entitled 'Art Heritage of Rashtrapati Bhavan' will be unveiled by the President on the website www.presidentofindia.nic.in," said the President's Press Secretary, Venu Rajamony.

The catalogue will feature 113 photographs of the paintings and select art objects. It is designed to look like a photo album with images on the left-hand side and a description of the item, background of artists and subject of the painting on the right. Viewers can browse through the catalogue by category or location.

"A series of activities have been planned at Rashtrapati Bhavan to kick start President's birthday on Dec. 11 and also to showcase the new developments and facilities at the estate," said Ms Paul.

The two-day celebrations will witness a series of cultural and philanthropic activities being organised by Rashtrapati Bhavan, like 'Samagam', a community initiative for senior citizens residing on the President's Estate.

A Financial Literacy Festival and a literacy centre and library will also be inaugurated today at the Rajendra Prasad Sarvodaya Vidyalaya in the President's Estate.

This facility for students to gain financial literacy using dummy banking system and classes conducted by the State Bank of India.

"The National Payment Corporation of India (NPCI) will create a financial library and students will be handed the RuPay card with Rs 25 credit balance and a pin for the card to buy books at the library. This will help them to gain knowledge about finance," Ms Paul said.

The Estate will also host a "go green" initiative, to be launched by the President, under which the use of motor vehicles will be reduced while bicycles would be promoted on the premises.

"Fifty cycles will be made available at four locations on the Estate. There will be eco-friendly smart vehicles which will ply on the roads within the Estate to ferry passengers to those locations," Ms Paul said.

The President will also lay the foundation stone for a housing complex of Type II/III houses for staff.

Promoted
Listen to the latest songs, only on JioSaavn.com
On the second day of the celebrations on Dec. 12, a grand, 2,200 sq.m ceremonial hall will be inaugurated by the President which is an extended part of the integrated Rashtrapati Bhavan cultural centre with an art gallery, multi-purpose halls and auditorium.

The hall will host the 'At Home' receptions and 'Guards of Honour' for visiting foreign dignitaries in case of inclement weather when these ceremonies cannot be held in the open.