Union Health Secretary Rajesh Bhushan advised states not to let their guard down and keep a strict vigil on the international passengers coming to the country through various airports, ports and land border crossings. 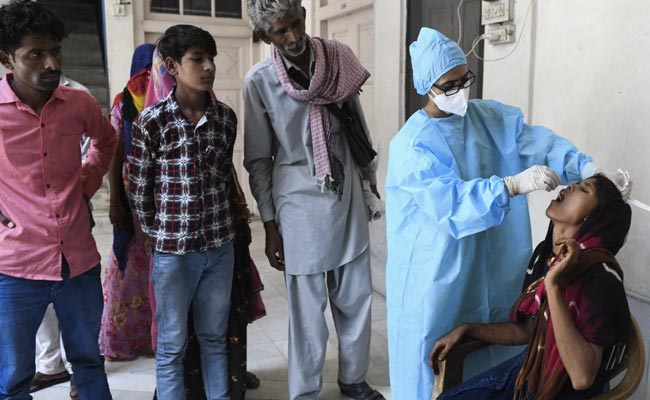 India has so far not reported any case of the new COVID-19 variant Omicron. (File)

Underlining that the Omicron variant of SARS-CoV-2 does not escape RT-PCR and RAT tests, the Centre on Tuesday advised states and union territories (UTs) to ramp up testing and undertake effective surveillance of international passengers even as it asserted that no case of the new variant has been found as yet in the country.

Reiterating that the revised guidelines and international travel advisories of the Union Health Ministry have been shared with the states, Mr Bhushan advised states not to let their guard down and keep a strict vigil on the international passengers coming to the country through various airports, ports and land border crossings and stressed on strict monitoring of hotspots, a health ministry statement said.

Also, noting the critical role of vaccination as a powerful defence against COVID-19, NITI Aayog member (Health) Dr V K Paul said the 'Har Ghar Dastak' vaccination campaign has been extended till 31st December with a focus on 100 percent first dose coverage and completing the backlog of second dose vaccination, the statement said.

India has so far not reported any case of the new COVID-19 variant Omicron, Union Health Minister Mansukh Mandaviya informed Parliament on Tuesday, noting that the government has taken measures to ensure that it does not reach the country.

The Centre has issued an advisory after looking at the developments globally and is keeping a close watch at ports, he said, adding genome sequencing of suspected cases is also being done.

During the Question Hour in the Rajya Sabha, the minister said, "Omicron variant has been found in 14 countries now. It is being studied here although it has not been reported in India."

At the meeting chaired by Mr Bhushan, the states were specially advised to undertake effective surveillance of international passengers.

Testing of samples of international travellers coming from "at-risk" countries on the first day and of specified category of passengers on the eighth day needs to be scrupulously done, Mr Bhushan stressed.

He said international passengers from "at-risk" countries are being advised to prepare to wait at the airports till the report of the RT-PCR test is available.

States were asked to send all positive samples for genome sequencing to INSACOG Labs (mapped with states) promptly and that states should undertake contact tracing of positive individuals and follow up for 14 days, the statement said.

DG, ICMR Dr Balram Bharagava informed that the Omicron variant doesn't escape RT-PCR and RAT and hence, states and UTs were advised to ramp up testing for prompt and early identification of any cases the statement said.

The Union health secretary urged states to strengthen the testing infrastructure while strictly implementing the testing guidelines and ensure ample testing in each district while maintaining the RT-PCR ratio.

States and UTs were advised to have continuous monitoring of areas where recent clusters of positive cases have emerged and send all positive samples for genome sequencing to the designated INSACOG Lab in a prompt manner.

They were asked to do effective and regular monitoring of home isolation cases, with physical visits to homes of passengers from "at-risk" countries.

The status of those who are negative after the test on the eighth day has to also be physically monitored by the state administration, Mr Bhushan said.

"States were also asked to ensure the preparedness of health infrastructure (availability of ICU, O2 beds, ventilators, etc.) and to implement Emergency Response and Health System Preparedness (ECRP-II) with a focus on rural areas and for paediatric cases," it said.

They were asked to work for early implementation of sanctioned pressure swing adsorption (PSA) oxygen generating plants, along with ensuring a seamless supply of logistics, drugs, O2 cylinders, etc.

States have been asked to co-ordinate with Airport Health Officers (APHOs) and 'Air Suvidha' portal for a list of positive travellers, including details of all international travellers, and strengthen support to them for effective surveillance.

States have been advised for meetings with relevant officials to ensure smooth implementation of the new Guidelines for International Travelers which come into effect from midnight today.

Daily monitoring by the State Surveillance Officer has been directed to track and contain the spread of transmission of any VoCs in the country, especially from any recent clusters of positive cases.

Regular dissemination of evidence and science-based information on the merging scenario should be shared with the masses through weekly media briefings, it re-emphasised.