Will Fight Jammu And Kashmir Assembly Election On Our Own: Omar Abdullah

The NC vice-president said his party is prepared to face the people, unlike the BJP which is "trying to delay the elections on one pretext or the other knowing fully that it will face a drubbing in polls". 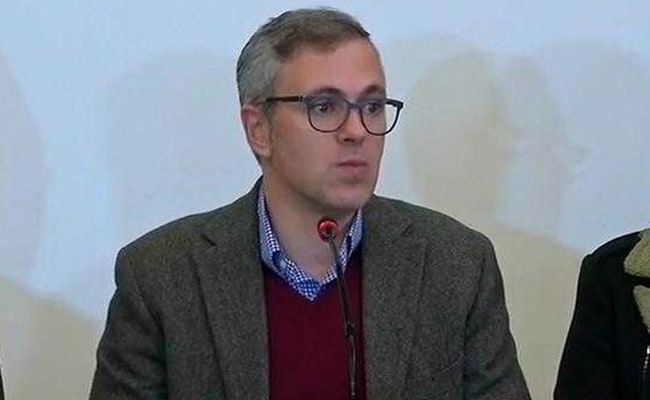 National Conference leader Omar Abdullah today ruled out a pre-poll alliance with any party for the Jammu and Kashmir Assembly elections, saying his party had joined hands with the PDP and Congress to "save the state".

The PDP had on November 21 staked claim to form a government with the backing of rival National Conference (NC) and the Congress. This was followed by another bid from the two-member People's Conference which claimed the support of the BJP and 18 lawmakers from other parties.

After these developments, Governor Satyapal Malik abruptly dissolved the Jammu and Kashmir Assembly on the night of November 21.

"We will fight the (assembly) election on our own... When we talk about forming the next government on our own, then there is no scope of leaving any seat for any one, even as I know they are eyeing some seats," Mr Abdullah today said.

Defending his party's decision to join hands with the PDP and Congress to stake claim for the formation government, he said, "We decided to do something to save the state, to strengthen the communal harmony and brotherhood, to restore peace - it was not an easy decision. I was aware that my party will suffer politically due to this decision."

Asserting that he chooses the state over his party, as it was for the betterment of Jammu and Kashmir and its people, Omar Abdullah said the NC was to extend support to the PDP and Congress from outside and the government was to run for the time being till the situation gets back to normal for holding of fresh elections.

He called for holding of assembly polls in the state along with the general elections next year, and also challenged the BJP to announce its chief ministerial candidate while accusing it of betraying the people of Jammu region.

The NC vice-president said his party is prepared to face the people, unlike the BJP which is "trying to delay the elections on one pretext or the other knowing fully that it will face a drubbing in polls".

He said the BJP claimed that the plan to form the government was orchestrated in Dubai and London at the behest of Pakistan. "We were not the one. But the second letter (from Peoples Conference chairman Sajad Lone) came from London," Mr Abdullah said.

Mr Abdullah said the PDP-Congress-NC combine had the numbers and there was no scope for horse-trading or any other malpractice here, unlike the BJP-supported group which had only 28 lawmakers together.