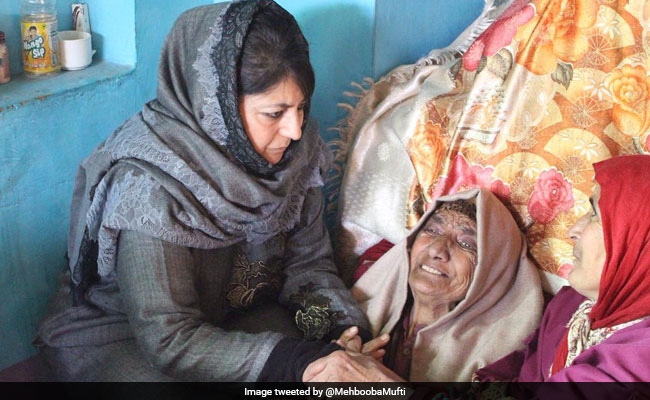 These visits are being seen as Mehbooba Mufti's attempt at strengthening her base ahead of elections.

Former Jammu and Kashmir Chief Ministers and political rivals Mehbooba Mufti and Omar Abdullah, who were ready to team up to form a coalition government in the state a few months ago, are back to being at loggerheads.  On Thursday, the two had a prolonged argument on Twitter over Ms Mufti's visits to the families of the terrorists in the Valley.

The People's Democratic Party chief, who met the sister of a terrorist in south Kashmir's Pulwama last week, met another family in Shopian today. Many see these visits as her attempt to mollify her voter base and repair her party's image, which had suffered a heavy dent following the alliance with the BJP.  Harassment and atrocities against families of terrorists, they say, marked her rule that ended in June after the BJP withdrew support to the coalition government.

The BJP has dismissed her outreach campaign as a "political gimmick". This morning, Omar Abdullah joined issue with a couple of tweets:

The architect of "Operation All-out" & the overseer of the operations that killed hundreds of militants since 2015 is now going from one militant home to the next trying to rehabilitate a badly damaged reputation.

It was your duty as an opposition leader to reach out to these families , just like I did during your tenure as CM. I visited families that lost members who were killed during fake encounter at Manchil , during 2010 unrest & Shopian rape and murder case .

Boss if you can live with the hypocrisy of your actions who am I to be offended. Where was this outreach while you were sucking up to the BJP? I suppose the "woh kya doodh ya toffee laney gayey they" was part of this famed "outreach".

Governor Satya Pal Malik had quipped that "speaking for terrorists is a political compulsion for her" after Ms Mufti, in the wake of her Sunday visit to the home of a suspected terrorist, tweeted a series of photographs and warnings.

Rubina, the sister of the suspected terrorist, was beaten up, allegedly by the police. On the occasion, Ms Mufti had issued warnings to the police and asked the Governor to look into the matter.

"I want to ask the governor if you have a fight with a militant, why are his relatives, especially his sister, beaten? We will not allow this. I want to tell the governor and warn the police as well that if there is another such incident, then there will be dangerous consequences," she had said.

No mother wants her son to pick up a gun and lose his life in the prime of his youth. Therefore harassing the family is not going to help the situation . Had my initiative of cease fire sustained many more precious lives would have been saved .

No force or military can help us win this war with our people. Only affection of mothers and family will help reclaim our own generation in rage. pic.twitter.com/zg5yCiUPJf

Governor Satya Pal Malik said that he didn't take offence as she was the daughter of his friend Mufti Mohammad Sayeed. 'Elections are coming so they will talk like this because of their compulsions," he had said.

The state is expected to vote for a new government by May next year.