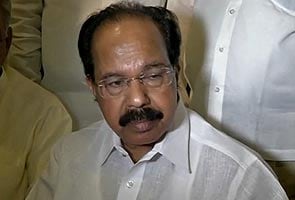 New Delhi: Leading by example, Oil Minister M Veerappa Moily today said he will travel by public transport every Wednesday, starting October 9, as part of the fuel conservation drive to save $5 billion in oil import bill.

Mr Moily said he and all officials in his ministry as well as in oil PSUs will travel by public transport every Wednesday.

"I had Chief Ministers, central ministries and PSU heads to declare one day of the week as 'bus day' during which staffers be encouraged to utilise only public transport for their daily commute. As part of it, I will either take metro or a bus to work every Wednesday starting from October 9," he said.

A circular is also being issued for asking officers in the Ministry of Petroleum and Natural Gas as well as 14 public sector firms under the ministry like ONGC and IOC to take public transport every Wednesday.

Battling a record current account deficit (CAD) that is a result of mounting oil import bill, Mr Moily is hoping measures like the 'Bus Day' together with a Rs 52 crore nationwide six week mega campaign to propagate conservation of oil and gas will help taper demand, thereby cutting oil import bill by $5 billion.

India spent $144.29 billion last fiscal on importing its oil needs, which is the single biggest item impacting the CAD, the difference between the inflows and outgo of foreign exchange.

Mr Moily has suggested to the Department of Personnel to introduce staggered office timings for government employees to decongest road traffic during peak hours and asked Urban Development Minister to introduce "Free Cycle Scheme" in select cities for saving fuel.

Mr Moily, who travels in a government car, said there is a Delhi Metro station near his residence and he could take metro to Central Secretariat station, which is just a stone's throw from Shastri Bhawan, the seat of his ministry.

The Ministry said the mega conservation drive will be launched on October 1 which will propagate the need for fuel conservation. Cricketer Virat Kohli and shuttler Saina Nehwal will be lead icons in the campaign.

The campaign would encourage proper driving habits, better maintenance of vehicles, use of carpooling for going to offices and schools, switching off engines at traffic lights and driver training to minimise the wastage of fuel.

Promoted
Listen to the latest songs, only on JioSaavn.com
The activities planned in the campaign include direct interaction with consumers to encourage them in adopting conservation measures while using TV, print and electronic media to generate awareness on the issue.