The evacuated people were shifted to flood shelters, schools and other public buildings. 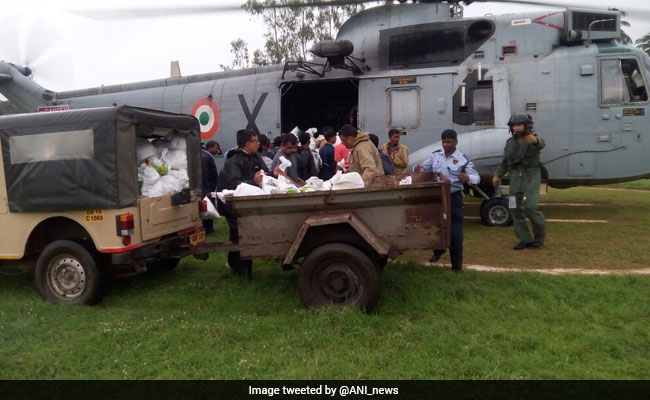 Bhubaneswar: Odisha government evacuated about 6,000 people after an embankment of Brahmani river in Jajpur district breached, while rescue operation was also on in Dhenkanal and Kendrapara districts where fresh areas were inundated.

A major breach of 100 to 150 feet width has been reported on left embankment of Brahmani at Kimbhitipal, affecting 16 villages of Bari block and 18 villages of Jajpur block, sources in the special relief commissioner's (SRC) office said adding that about 6000 people were evacuated.

Jajpur district collector, sub-collector and other officials were monitoring the rescue and evacuation operation, SRC B P Sethi said adding that five boats have been pressed into rescue service.

The evacuated people were shifted to flood shelters, schools and other public buildings. Dry food and free kitchen are being organised for them, Mr Sethi said.

The officials said that the water level swelled in Brahmani following opening of sluice gates at the Rangali reservoir. The breach in the embankment has caused inundation in Jajpur, Kendrapara, Dhenkanal and Angul districts.

Water level of Brahmani at Jenapur and Kharasrota river at Binjharpur is slowly rising, they said.

Meanwhile, the flood situation in Sundargarh district has improved as the water level of Brahmani, Ib and Koel river has receded.

Out of the 1600 people evacuated in Sundergarh district, 1405 have returned homes, Mr Sethi said.

Chief Minister Naveen Patnaik at a review meeting asked the officials to ensure that flood hit people in Rayagada and Bhadrak get the house damage assistance within three days as per the provision of the NDRF and SDRF.

Rural development department was asked to immediately take up repair works of six bridges and roads damaged in flood at an estimated cost of Rs 25 crore.