Mr Pawar has given out nothing after his meeting with Congress president Sonia Gandhi on Monday and has largely been cautious and noncommittal on forming an alliance with the Shiv Sena.

Sena desperately trying to seal a pact with the NCP and Congress after breaking up with the BJP.

Kept in suspense by the Nationalist Congress Party (NCP) and Congress, who continue talks on an alliance with the Shiv Sena in Maharashtra, the party's Sanjay Raut today said "all obstacles have been cleared" and it would be clear by tomorrow.

"All obstacles that were raised in the last 10-15 days have been cleared. By tomorrow you will know that all obstacles have been cleared," the Shiv Sena MP told reporter today, as a meeting between NCP chief Sharad Pawar and Prime Minister Narendra Modi over the farm crisis in Maharashtra caused speculation.

Sanjay Raut claimed that he had requested Mr Pawar to brief the PM about the state of farmers in Maharashtra and there was nothing unusual about politicians discussing issues of their state with the Prime Minister.

Mr Pawar has given out nothing after his meeting with Congress president Sonia Gandhi on Monday and has largely been cautious and noncommittal on forming an alliance with the Shiv Sena. The veteran leader has reportedly held many talks with the Congress to try and bring it on board with a Sena-NCP-Congress coalition government in Maharashtra. Leaders of the NCP and Congress will meet this evening as well. 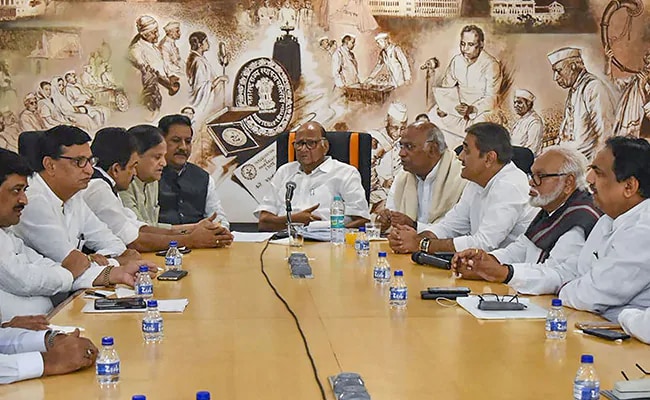 Sources say the Sena-NCP-Congress alliance talks are on track and issues of conflict have mostly been resolved.

"There are certain internal processes of the different parties -- Shiv Sena, Nationalist Congress Party and Congress -- which are currently on. A Sena-Chief Minister-led government will assume office by the first week of December," Sanjay Raut asserted, adding that there would be a "full stop" to the meetings soon.

Mr Raut has been in touch with Mr Pawar as the Sena desperately tries to seal a pact with the NCP and Congress after breaking up with long-term partner BJP.

The BJP (105) and Sena (56) together scored a comfortable majority in the Maharashtra election last month but fell out over the Sena's demand for rotational chief ministership. The Sena is confident of forming government along with the NCP and Congress.

To a question on reported attempts by the BJP to pursue the NCP, which is two seats less than the Shiv Sena, Mr Raut said such theories were circulated by those who don't want to see a Shiv Sena government.

"In the Sena, the decision-making is faster as it comes from the top to bottom, in NCP, the chief sounds out the party on taking a certain decision democratically and takes a little longer. The Congress has its own century-plus old traditions of arriving at any decision. The picture will start clearing from tomorrow," Mr Raut said.

Sources say the Sena-NCP-Congress alliance talks are on track and issues of conflict have mostly been resolved. Officially, however, the NCP and Congress say there is "plenty of time" as Maharashtra has been placed under President's Rule.