Objections Of Naysayers Of Reform "Remain Frozen In Time": India At UN

Deputy Permanent Representative of India to United Nations Ambassador R. Ravindra made the comments while addressing the General Assembly session on Question of equitable representation on and increase in the membership of the Security Council'. 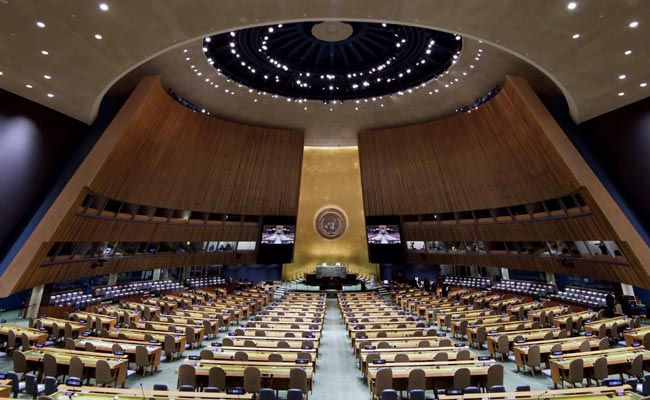 India cautioned that inaction on part of UN membership is not without cost. (Representational)

The UN Security Council is unable to act effectively in addressing increasingly complex issues of international peace and security as it lacks inclusive representation, India has said, asserting that while the global geo-political landscape has transformed, the objections of the naysayers of reform “remain frozen in time”.

Deputy Permanent Representative of India to United Nations Ambassador R. Ravindra made the comments while addressing the General Assembly session on ‘Question of equitable representation on and increase in the membership of the Security Council'.

“We heard our leaders at the General Debate of the UNGA earlier this year high-light the urgency and importance of reforming global governance structures in order to make them fit for purpose for the needs of the 21st century,” he said on Monday.

Mr Ravindra said that in the over four decades that have gone by since the inscription of this item on the agenda of the General Assembly, “even as the geo-political landscape around us has transformed, the objections of the naysayers of reform remain frozen in time.”

He cautioned that inaction on part of the UN membership is not without cost.

With the Security Council being called upon to address increasingly complex issues of international peace and security, the powerful UN organ “finds itself unable to act effectively, for it is lacking inclusivity of those should be represented there, and therefore short of legitimacy and credibility.”

India, currently serving a two-year term as a non-permanent member of the 15-nation Council, has been at forefront of efforts to push for urgent reform and expansion of the Security Council saying that the most powerful UN organ in its current form does not reflect the contemporary realities of the 21st Century.

Mr Ravindra outlined India's well-known and substantive position on the question of Security Council reform that the Council membership should be expanded in both the permanent and non-permanent categories.

“This is a position that is clearly supported, on record, by the majority of Member States,” he said.

He underlined that a larger permanent membership will ensure enhanced representation and say in decision making from the regions and members which are currently not represented or under-represented compared to their role and input so far. “This would increase the legitimacy, effectiveness and responsiveness of the Council by ensuring that the decisions taken reflect the interest of the broad membership and thus will be better implemented,” he said.

India said it looks to Shahid's “Presidency of Hope” to finally deliver concrete progress as the Intergovernmental Negotiations (IGN) enter their 14th year.

Mr Ravindra lamented that the IGN so far has been restricted to making repeated statements of known positions, without any effort to narrow differences.

“It is the only process of its kind in the UN where 'negotiations' have been conducted in a multilateral setting without any text. While this may suit those who wish (to) block progress, this goes against the basic tenets of multilateral diplomacy,” he said.

On the way forward in the IGN process, he said “our simple appeal” is to “empower the Co-Chairs to finally enable a "normal'' UN process.”

He noted that the updated Elements Paper produced at the end of discussions in the last IGN session could be a suitable starting point.

While the Elements Paper is not a perfect document and needs more streamlining, addition of attributed positions from various groups and Member States, Mr Ravindra said, "what we seek is a discussion format that breaks free from the cycle of cluster-based statements, and allows every stakeholder to contribute their positions and proposals to the text, which would be updated to reflect them after each round of discussions."

Emphasising that simply having a single negotiating document will not resolve the differences in substantive positions, he said it is also true that without such a text “on the screen” to focus the discussions on, “it is impossible for any of us to demonstrate flexibility in reaching an outcome."