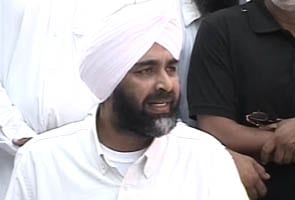 Chandigarh: Punjab's ruling Shiromani Akali Dal (SAD) has expelled a defiant Manpreet Singh Badal from the party, a week after he was sacked as the state's Finance Minister for going against the party line on subsidies and the Centre's reported debt waiver offer.

The action against the 48-year-old four times MLA from Gidderabaha was taken by SAD after he failed to appear before DAC here today following a show cause notice issued to him last week in the wake of his differences with the party over the reported conditional debt waiver offer from the Centre.

Earlier in the day, the DAC, facing defiance from Manpreet, had recommended his expulsion from the party.

Manpreet was suspended from the party and sacked as minister on October 13 after he had locked horns with the party top brass on the issue of subsidies and the Centre's reported offer of conditional waiver of loans taken by the state during militancy years in Punjab.

The senior legislator was asked by the DAC on October 11 to appear before it today and not to go public on any issue during the interim period.

However, Manpreet stuck to his views on phasing out the subsidies in return for debt waiver and had announced earlier itself that he would not appear before the DAC.

"We had asked Manpreet to appear before us by 11 am, but we waited till 1.30 pm. He did not bother to make his presence before us... besides he also made statements against (his cousin) Sukhbir Singh Badal, the core committee of the SAD... he has indulged in anti-party activities," DAC chairman Ranjit Singh Brahmpura said.

He said the decision to recommend Manpreet's expulsion from the party was "unanimous."

"Manpreet had made condemnable statements against Sukhbir and core committee members of the SAD," he said.

The sacked minister had maintained that he would continue his fight by remaining within the SAD.

Promoted
Listen to the latest songs, only on JioSaavn.com
Cheema said the party also issued show-cause notices to two MLAs Jagbir Singh Brar, and Manpreet's relative and Manjinder Singh Kang who had rallied behind the former Finance Minister.

Another MLA Sant Ajit Singh from Chamkaur Sahab, who had also sided with Manpreet, took a U-turn on Tuesday after Sukhbir met him in Ropar district.