Prime Minister Modi said: "Black money used to be parked in real estate sector. But with decisions like notes ban, we put a check on it." 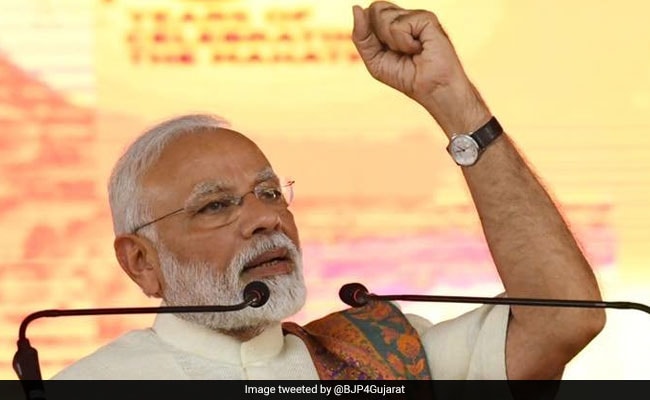 PM also called upon people to vote a single-party majority government at the Centre.

Prime Minister Narendra Modi on Wednesday said that the demonetisation exercise helped bring down prices of houses and made them affordable for the youth.

He said he was being asked about the gains from the 2016 notes ban but the question should be put to the youth who gained from it.

"I am asked about the benefits of the notes ban decision. You should address this to the youth, who could buy residential homes at affordable rates after the decision," PM Modi said.

The Prime Minister said: "Black money used to be parked in real estate sector. But with decisions like notes ban, we put a check on it."

The Prime Minister was speaking after laying the foundation stone of the extension of the terminal building at Surat Airport.

He said the UDAAN scheme of the Civil Aviation Ministry was the result of his dream that the common man should also be able to undertake air travel.

"Today I am happy to say that the scheme has catapulted our country among the world's fastest-growing aviation markets," PM Modi said.

Referring to the housing sector, the Prime Minister said that his government built 1.30 crore houses during the last four years of the NDA rule while the Congress-led United Progressive Alliance (UPA) built 25 lakh houses over a decade.

Praising his own governance, PM Modi said the previous governments would have taken more than 25 years to do the work that he had done in the last four years.

The Prime Minister called upon the people to vote a single-party majority government at the Centre.

"For the last 30 years, the country had a 'hung Parliament' and this had affected development. Four years ago, people voted a government with a full majority after which the country is progressing rapidly," he added.