Not One Bullet Fired In 40 Years Despite Border Dispute With China: PM Modi

PM Modi was responding to a question whether India's opposition to China's 'One Belt One Road' project reflects deep discord in their relationship. Despite differences, New Delhi and Beijing have come together on the BRICS platform, said PM Modi. (PTI)

St. Petersburg, Russia: The world has increasingly become inter-connected and inter-dependent, a transformation that has made it necessary for India and China to cooperate on trade and investments despite a simmering border dispute, Prime Minister Narendra Modi said on Friday. "It is true that we have a border dispute with China. But in the last 40 years, not a single bullet has been fired because of border dispute," PM Modi said during a panel discussion at the St Petersburg International Economic Forum.

He shared the stage with Russian President Vladimir Putin and the leaders of Austria and Moldova.

PM Modi was responding to a question whether India's opposition to China's 'One Belt One Road' project reflects deep discord in their relationship. India had boycotted a high-profile conference recently hosted by China on the project, citing "sovereignty" issue since it passes through Pakistan-occupied Kashmir.

The prime minister noted that it is not the same bipolar world of before when nations were aligned either with the United States or the former Soviet Union. 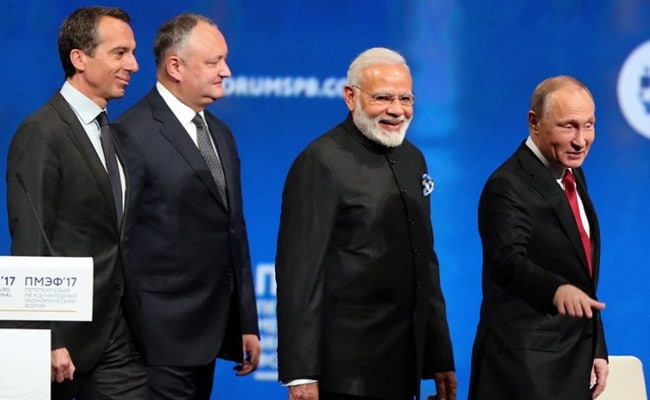 PM Modi shared the stage with Russian President Vladimir Putin and the leaders of Austria and Moldova.

"It is an inter-connected and inter-dependent world. So countries may have some disputes and some areas of collaboration," he said, noting that India and Russia relationship has stood the test of time as it was based on trust.

The 24-page St Petersburg Declaration, released on Thursday after his summit with Mr Putin, is a testament to India-Russia relation, PM Modi said. "And I know the world will minutely scrutinize every word for future direction of our relations."

On China, he said that despite differences, New Delhi and Beijing have come together on the BRICS platform to create two financial institutions, one headed by China where India is a partner and one BRICS Bank where the two regional superpowers are collaborators.

"The world is increasingly becoming inter-dependent. We believe in 'Sabka Saath Sabka Vikaas' (Cooperation of all, development for all). This is not just for the domestic programmes but also for international cooperation. We want to carry everyone along for development," he said.

(This story has not been edited by NDTV staff and is auto-generated from a syndicated feed.)
Comments
Narendra ModiOne Belt One RoadIndia China ties