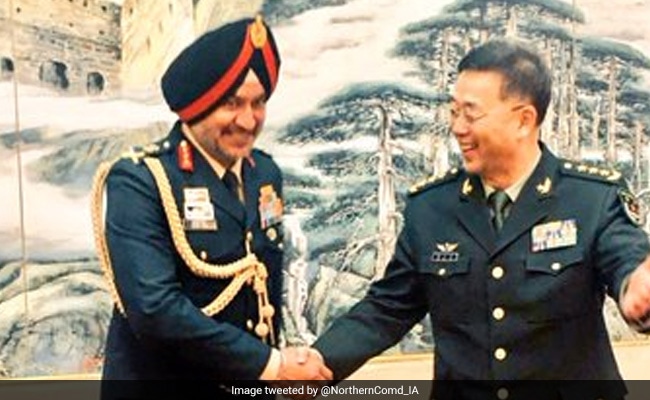 Lt Gen Singh's visit is the second-ever by a Northern Army commander to China.

Lt Gen Singh's visit is the second-ever by a Northern Army commander to China, earlier being in 2015 by his predecessor Lt Gen B S Hooda.

The visits of the Northern Army Commanders to China are significant as one of its previous heads Lt Gen B S Jaswal was denied regular visa in 2010 on the ground that the Northern Command covered Jammu and Kashmir, which led to an angry reaction from India and disruption of ties between the two militaries.

The issue was resolved with Lt Gen Hooda's visit in 2015 leading to the normalisation of ties between the two militaries.

Lt Gen Singh in the last three days has visited Beijing and Chengdu. On Thursday, he reached Urumqi, the provincial capital of Xinjiang, which borders PoK.

He is due to interact with the top officials of the People's Liberation Army (PLA) in Urumqi and visit local military installations on Friday, sources here told PTI.

Technically China and Pakistan have no borders but only connected through PoK.

Lt Gen Singh's visit to Xinjiang also assumed significance as it comes in the backdrop of India''s move to revoke Article 370 which granted special status to Jammu and Kashmir, and bifurcate the state into two Union Territories.

China has said that bifurcation of Jammu and Kashmir into two union territories is "unlawful and void", and it "challenges" China''s sovereignty.

India has told China that the revocation of the special status of Jammu and Kashmir is an internal matter and sole prerogative of the country and has no implication for either the external boundaries of India or the Line of Actual Control (LAC).

Xinjiang has been in the news in recent months over allegations that China has interned more than a million Uighur Muslims, a claim Beijing deny.

The visit would "serve as a milestone" by cementing mutual ties. "This will achieve the twin aims of high level military co-operation and stabilizing the sensitive borders of both the countries," an Indian army official said.

The visit comes close on the heels of Joint Military Exercise ''Hand-in Hand 2019'' held recently between the two countries in eastern theatre in Meghalaya.