Though the Congress failed to get a majority in Meghalaya and did not win a single seat in either Tripura or Nagaland, the leaders insisted they were not troubled by the results and were confident of emerging victorious in Karnataka, where elections are to be held shortly. 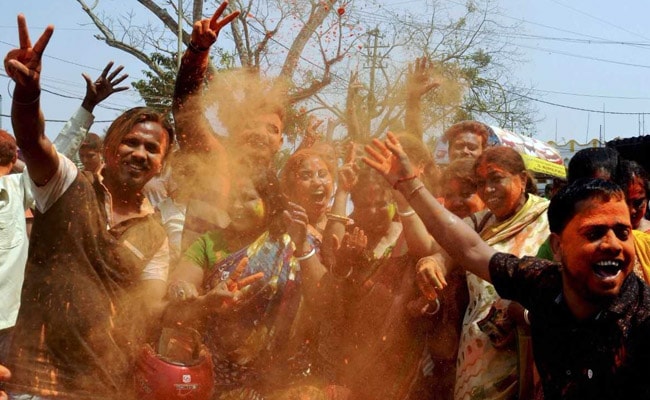 Congress failed to get majority in Meghalaya and did not win a single seat in either Tripura or Nagaland.

New Delhi: The Congress's euphoria over recent by-poll victories may have been punctured after the party's dismal performance in the Northeast, but its leaders believe the results will have no bearing on Karnataka, which they are confident of holding on to.

A party leader claimed the BJP's victory in the Northeast was an "aberration" that did not reflect the country-wide "resurgence of the Congress".

Though the Congress failed to get a majority in Meghalaya and did not win a single seat in either Tripura or Nagaland, the leaders insisted they were not troubled by the results and were confident of emerging victorious in Karnataka, where elections are to be held shortly.

Sources in the Congress stressed the Northeast had its own compulsions and was "no real lesson for South India".

After the poor Congress performance in elections in the northeastern states, the results of which were declared yesterday, the party's morale was at a low, with no leader willing to speak out about the loss.

With Congress president Rahul Gandhi out of country, the leaders preferred not to analyse or talk about the defeat.

Some party insiders admitted that the morale of the party, boosted after the recent victories in bye-elections in Rajasthan and Madhya Pradesh and its performance in Gujarat Assembly elections, had been badly dented after the Northeast results.

Congress general secretary incharge of Karnataka KC Venugopal said the result of the elections in the northeastern states will have no effect on the party's poll prospects in Karnataka, where it will get a "comfortable majority".

"There will be no impact of the results of the northeastern states in Karnataka. Definitely, we will form our government," he told PTI.

Asked whether the JD-S and BSP combine will affect the party's prospects, he claimed, "I don't think it will have any effect. We will get a comfortable majority."

Party spokesperson and research cell in-charge Rajeev Gowda, however, said the Northeast results were an "aberration" and the national trend was against the BJP.

"The BJP's growth in the Northeast is by encouraging defections and endorsing corrupt politicians," he said.

These "hollow victories" would not have a bearing on Karnataka, "which has already seen the real face of the BJP and its leaders", he told PTI.

Gowda said the country was seeing a "revival and resurgence" of the Congress starting with Gujarat and the by-polls in Rajasthan and Madhya Pradesh, and "the cutting to size of the BJP due to its corruption and non-performance".

"The results do not change the ground realities, which are in favour of the Congress," he held.

Claiming that the Congress was on an "extremely strong wicket", he said the BJP would be "crushed" in Karnataka.

Congress leader and former Rajasthan chief minister Ashok Gehlot said, "BJP conveniently ignores its defeats, be it in Bihar, Bengal or Punjab and makes such a big deal of its victory!."

"The BJP has made it a habit to present victory with full pomp and show but goes silent when it comes to defeats. There is no need for BJP to flaunt and continue to live under misconception," he said.

Another Congress leader felt the BJP would "pay dearly" for banking on former chief minister B S Yeddyurappa as he had earlier been jailed. The people of the state had seen his governance from 2008 to 2013, during which many BJP ministers were also sent to jail on corruption charges, the party leader said.

The party has also not given up all hope in the Northeast, and is working out on forming a government in Meghalaya after its losses in Tripura and Nagaland.

While the BJP wrested the Left bastion of Tripura and received an invitation to be a part of the government in Nagaland, Meghalaya elected a hung Assembly.

The Congress emerged as the single largest party in Meghalaya with 21 seats. Senior party leaders Ahmed Patel and Kamal Nath are in the state capital of Shillong, working out possible tie-ups with Independent MLAs in a bid to form a government.

They met a number of leaders from smaller parties in a bid to cobble up a coalition in the northeastern state.

The two leaders claimed the Congress would form government in Meghalaya and was working towards it.

Promoted
Listen to the latest songs, only on JioSaavn.com
The Congress's move comes in the wake of criticism in the past that the party was caught napping in Goa and Manipur, where despite emerging as the single-largest party it failed to form a government.

Meghalaya is one of the five states and UTs currently held by the Congress. The other states are Punjab, Karnataka and Mizoram, and the Union Territory of Puducherry.