Harsh Vardhan informed that 81 people were admitted to the hospital on Monday and 69 on Tuesday. 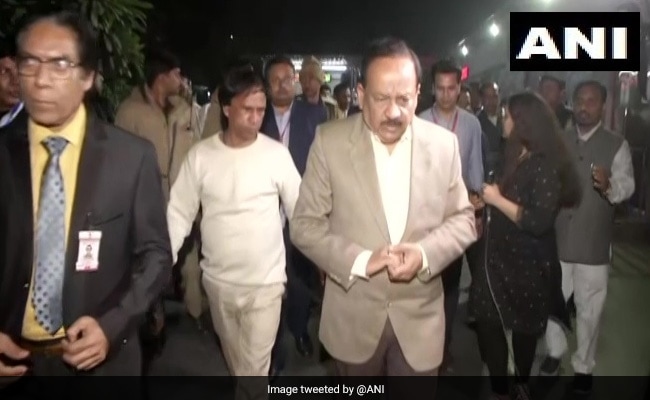 "Will pray for the speedy recovery for all patients," Harsh Vardhan said.

Speaking to media, Mr Vardhan informed that 81 people were admitted to the hospital on Monday and 69 on Tuesday. While a few of them have been discharged after treatment, others are being treated for their injuries.

"On Monday, 81 patients arrived here and 69 on Tuesday. 13 deaths have occurred. Doctors told either they have been brought dead or in a critical condition. 30 to 40 per cent have gone back after receiving treatment," he said.

"I visited different departments as people have suffered injuries in different parts of the body. Some have them on the chest while some on the abdomen. You can say their condition is critical but doctors are trying their best. Preliminary treatments have been done. Some patients also underwent operations," Mr Vardhan said.

Terming it an "unfortunate incident", Mr Vardhan said he will "pray for the speedy recovery for all patients and appeal to everyone in society not to believe in rumours and maintain peace."

BJP MP Manoj Tiwari termed the Delhi violence as "very painful" and urged people to maintain peace and help the government in resolving the "dreadful situation".

Union Home Minister Amit Shah also held a meeting with Delhi Police and Home Ministry officials in the wake of violence that has been raging in the national capital for the past two days.

The Home Minister urged political parties leaders to exercise restraint, rise above party lines to tackle the situation, according to an official release.

He also urged leaders to avoid giving provocative speeches and statements which could result in a flare-up of the situation.

At least 13 persons have died and around 190 are injured in the clashes between pro-CAA and anti CAA protesters that have been raging in North-East Delhi for the past three days.