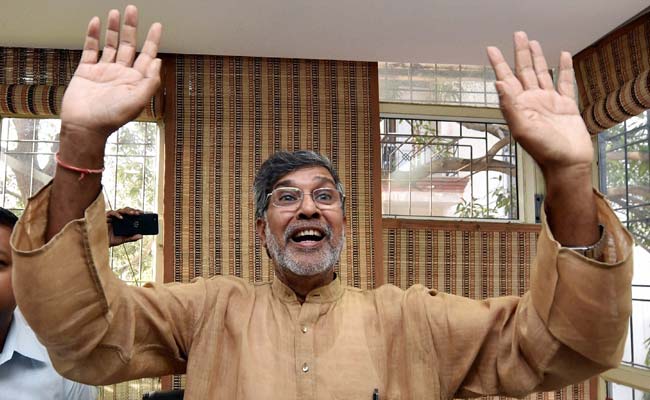 New Delhi: Many years have passed, but a police chief named Amitabh Thakur can remember the precise moment when he first set eyes on Kailash Satyarthi, who won the 2014 Nobel Peace Prize on Friday.

Satyarthi was lying on the ground, bleeding profusely from the head, while a group of men converged on him with bats and iron rods. They worked for the Great Roman Circus, which was illegally employing teenagers trafficked from Nepal as dancing girls. Satyarthi, a Gandhian activist in a simple white cotton tunic, had come to free them.

As he approached the scene, the chief realized he was interrupting a savage beating.

"I remember that when I reached this man, he was rather composed," Thakur said. "I was very impressed, for the simple reason that a man was putting his life in danger for a noble cause."

Satyarthi is not an international celebrity like 17-year-old Malala Yousufzai of Pakistan, with whom he is sharing the prize. Instead, he has labored for three decades to shave away at the numbingly huge problem of child slavery in India, using undercover operatives and camera crews to find the airless workrooms and mine shafts where children were being kept.

The circus raid was a reminder of the factors that converge in favor of employers using bonded labor in India: caste differences, religious differences, political and economic leverage. About 28 million children ages 6-14 are working in India, according to UNICEF, the U.N. children's agency. Satyarthi's organization, called Bachpan Bachao Andolan, or Save the Children Mission, is credited with freeing 70,000 of them.

In 1994, he started another group, called Rugmark, now known as GoodWeave International, in which rugs are certified to have been made without child labor.

Asked to explain the origin of his life's work, Satyarthi sometimes tells a story from his childhood, when he proudly entered a schoolyard for the first time and noticed a boy his own age, the son of a cobbler, gazing at him from outside the gate. He screwed up his courage and approached the cobbler, asking why his son did not go to school.

"He replied, 'Look, sir, we are the people who are born to work,'" he said. "I was so disturbed. Why do we people have so many dreams, and they have none? This has gone so deep to my heart, and that is when I started working with poor children. It was a nonissue in my country."

Satyarthi is the eighth Indian to win a Nobel, and only the second - after Mother Teresa - to win the Peace Prize.

As India undergoes swift economic expansion, a growing middle class has created a surging demand for domestic workers, jobs often filled by children. There is virtually no enforcement of labor laws, and newspapers regularly carry accounts of children sold into service and confined in horrific conditions, paid nothing and barely fed. They are sought-after employees, and in a population struggling with dire poverty, there is little will to stamp out the practice.

Simon Steyne, a longtime friend and colleague of Satyarthi's, said reducing child labor was ultimately the responsibility of governments and lawmakers.

"I don't think Kailash would say, 'We are going to go out and rescue the other 168 million,'" Steyne said. But he added that his friend was driven by a sense of moral urgency and a ground-level network of informants who continually provide reports of exploitation.

"If there is intelligence that there are children being physically trafficked on a train, they will get raid and rescue workers together at a station," said Steyne, an official at the International Labor Organization. "And when the train stops, they'll board the train and rescue the children."

Born about 6 1/2 years after India won independence, Satyarthi, 60, was so deeply impressed with Mahatma Gandhi's teachings that, as a teenager, he invited a group of high-caste local bigwigs to a meal prepared by low-caste "untouchables"; the invited guests boycotted the event and then shunned his family. Deeply upset, the boy dropped his Brahmin family name in favor of Satyarthi, which means "seeker of truth," according to an account on his website.

A few years later, Satyarthi was studying engineering at college when Indira Gandhi declared a state of emergency, cracking down on civil liberties and suspending elections. Already a Marxist, he mobilized students against the government and spent much of the period avoiding arrest warrants, said Prabhat Kumar, a longtime friend and fellow activist.

Satyarthi ultimately came to prominence by organizing raids to free child laborers. Undercover operatives posing as buyers or laborers would persuade businesspeople to reveal the location of their child workers.

A 2002 documentary for PBS followed Satyarthi to a stone quarry at 5 a.m., where he found children and adult workers living in brick shacks. Some of the children cried as he hugs them. The workers lifted cloth parcels with their belongings onto their heads, and ushered 52 people onto a truck to take them away.

"If they are caught, any kind of torture is meted out to them," he tells the camera. "They are beaten up severely, burned with cigarettes, sometimes tied down on trees and beaten with stones."

He added, "It's very difficult for them to realize or internalize freedom."

Many of the children were temporarily resettled at an ashram run by Bachpan Bachao Andolan before returning to their villages.

Promoted
Listen to the latest songs, only on JioSaavn.com
Among those who celebrated on Friday was Mohammad Manan Ansari, who began working at a mica mine at 6, digging ore that would sell for 5 to 20 cents a pound. Ansari, now a college student in his late teens, recalled watching as a small friend was crushed by falling rocks in one of the mine's tunnels. He said he would be grateful to Satyarthi for the rest of his life.

"My happiest moment was when Bachpan Bachao Andolan workers came and saved me," he said. "Now Kailash's Nobel is the second happiest moment of my life. I can't explain my joy in my own words."
© 2014, The New York Times News Service