No Sino-India Rivalry Over Influence in Africa: China 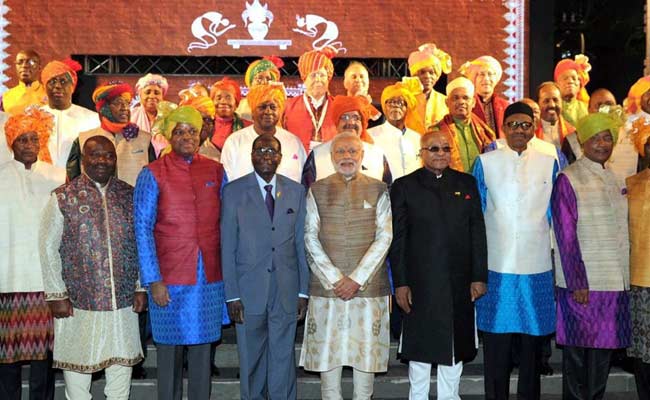 "There is this statement circulating around about competition between India and China. The fact is China and India have sound relationship because we share common interests," Chinese Foreign Ministry spokesman Lu Kang told a media briefing here when asked about China's reaction to the India-Africa Forum Summit.

"We have sound coordination mechanism. In Africa, we welcome international commitment including of India and to help India achieve long-term and sustainable and independent development," he said, adding that China itself is holding its Africa summit in South Africa next month which is expected to be attended by Chinese President Xi Jinping.

"We would like to work with the international community to make new contribution to Africa's development," said Mr Kang.

India's summit attended by 41 leaders and officials from 51 African countries evoked considerable interest in China, which in recent years has expanded its trade with African countries to top Rs 13 lakh crore or USD 200 billion against India's Rs 4.5 lakh crores or USD 70 billion.

China is also pouring a lot of aid into the African countries while its nationals are invested in businesses there.

"It's a win-win model when independent African countries choose to cooperate with others...India has built up solid connections over time with Africa and extensive personnel networking, unparalleled by China," an article on the India-Africa Forum Summit in the state-run Global Times said today.

"But over the past decades, China's input in Africa has included not only materials but emotional connections. China's assistance in education and training for Africa has far exceeded that by India," it said.

"Africa's economic relations with China, India, the US and European countries and the competition between these countries have provided diverse options to facilitate Africa's development. But the competition should be benign and not cripple the stability of African countries. In this sense, it is an unshakable responsibility for China and India to jointly push forward Africa's development," the article said.