No School on Christmas, Clarifies Smriti Irani Amid Anger Over Government Circular 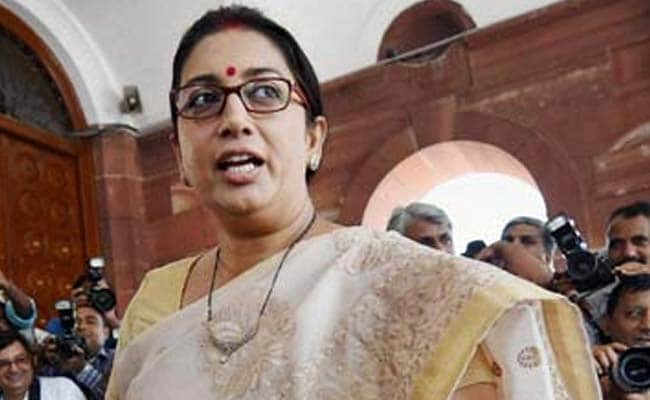 New Delhi: Education minister Smriti Irani has denied that schools will be open on Christmas Day, but a circular sent out by the government's Navodaya Vidyalaya Samiti has asked schools it runs to hold activities to observe 'good governance day' on December 25.

The notice says, "You are requested to ensure that Good Governance day is celebrated in all JNVs under your region. A consolidated report specifying activities carried out in all JNVs is to be submitted by email along with photographs/ video recordings to this office on 25th December 2014." The Navodaya Vidyalaya Samiti runs 595 residential schools all over the country.

"Deliberate mischief by ur reporter on the front page today. All schools closed for XMas, essay competition only online," the minister tweeted this morning, denying a report in a leading newspaper this morning that said the union human resource development ministry's plans to celebrate the birthday of former Prime Minister Atal Bihari Vajpayee as 'Good Governance Day' on December 25 could include getting students to participate in the essay competition and other activities.

The ministry later clarified that the celebrations were limited only to Navodaya schools which did not have a winter break. Citing that they are residential schools, the ministry added that students who stayed back "will have the opportunity to participate if they so wish in the essay completion" which it reiterated was being held "online".

The Left's Sitaram Yechury said, "On Gandhi Jayanti, you have a programme of Swacch Bharat; on Christmas, you want a programme for good governance; then, there is an entire campaign on religious conversions that's going on. All this is a whole package that we think is very dangerous to the very constitutional guarantees that have been given."

Mr Jaitley said, "HRD Minister Smriti Irani has informed me that no such instruction has been issued, no school will function (that day). Only an online essay competition (is being organised). That's all."

Ms Irani is part of a committee of top BJP leaders, which includes other ministers like JP Nadda, formed to plan a tribute on December 25 to Mr Vajpayee, one of India's most respected statesmen, who will turn 90 this year.

Prime Minister Narendra Modi had earlier this month told his party, the BJP's lawmakers that December 25 would be celebrated as "Good Governance Day" to honour Mr Vajpayee on his birthday.

Promoted
Listen to the latest songs, only on JioSaavn.com
The PM said the party would organize a nationwide tribute to Mr Vajpayee, who has been very unwell for nearly five years. In August, Mr Vajpayee was removed from the BJP's top decision-making body, its parliamentary board. Like party veterans LK Advani and Murli Manohar Joshi, he was nominated to a new committee assigned to mentor the BJP and referred to as the Marg Darshak Mandal or a steering committee.

The PM said all lawmakers must, on December 25, lead efforts to remove litter in their constituencies as part of the Clean India mission that he launched on Independence Day. The PM said he will be in his constituency, Varanasi, to lead by example.