Congress Leaders Detained Ahead Of March In UP Against BJP's Chinmayanand

The 23-year-old law student in Shahjahanpur was arrested by the police last week in a case of extortion filed by Chinmayanand's aides.

The Congress leaders wanted to march from Shahjahanpur to Lucknow.

Congress leaders were today refused permission to take out a march in support of the jailed law student who has accused the BJP's Chinmayanand of rape.The Congress leaders wanted to march from the town of Shahjahanpur to Lucknow, 180 km away, in solidarity with the student.

Party leader Jitin Prasada has been put under house arrest and about 80 workers of the party have been detained. Dramatic pictures showed Congress workers being lifted by policemen and taken away. The police have also blocked the borders of Shahjahanpur district.

The 23-year-old student was arrested by the police last week in a case of extortion filed by Chinmayanand's aides. Her family alleges that the police dragged her out of their home without even her slippers. The law student has spent the last four days in prison. 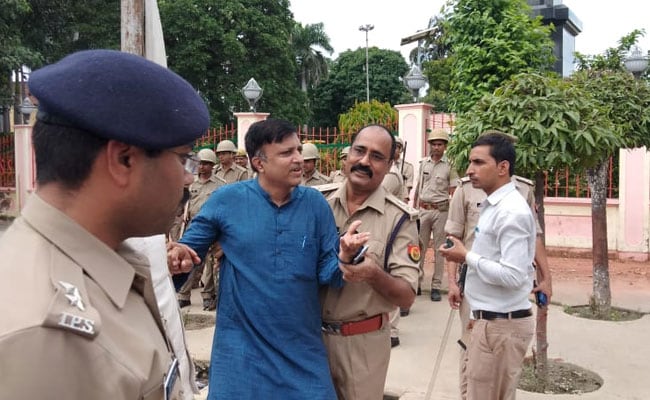 Congress leaders were detained ahead of a march in support of the Shahjahanpur law student.

Congress leader Priyanka Gandhi Vadra alleged that criminals in Uttar Pradesh have the protection of the government so they can intimidate the rape survivor. "The UP BJP government wants to suppress the voice seeking justice for the daughter of Shahjahanpur. The padyatra is being stopped. Our workers and leaders are being arrested. What is there to be afraid of?" she tweeted in Hindi.

In an audio message, Mr Prasada said: "Congress today wanted to hold a march to highlight the plight of the Shahjahanpur rape victim but the local administration is not allowing it. Tell me how is this not a violation of law? It's unfortunate."

Congress leader Ajay Kumar Lallu, who was picked up from his hotel room, said that the police action was proof of the lack of democracy in the Yogi Adityanath government. He was part of a delegation that met the student's parents yesterday.

The woman says the police refused to register her rape complaint last month, after which she filed a case in Delhi. Chinmayanand, 72, has been charged under a watered down sub-section of the rape law on "misusing authority for sexual intercourse". On the other hand, the woman has been charged with trying to extort Rs. 5 crore from Chinmayanand. The SIT said she had "confessed".

The student was produced before a court, which sent her to 14-day judicial custody.

The young woman has accused him of rape and blackmail for over a year.

Chinmayanand, who was arrested earlier this month on charges that he misused his authority and induced the student to have sex with him, continues to be in a hospital. He was taken to the ICU at Lucknow's Sanjay Gandhi Post Graduate Institute of Medical Sciences last Monday, just three days after his arrest. He had complained of "severe weakness and urinary problems".

A court in Shahjahanpur will today hear the bail requests of Chinmayanand as well as the student.

"In All Sectors, We Want To Become A Global Industry": Piyush Goyal