In an earlier hearing, the NCB told the court that WhatsApp chats of Aryan Khan, Arbaaz Merchant and Munmun Dhamecha had "shocking and incriminating" material that pointed to "international drug trafficking". 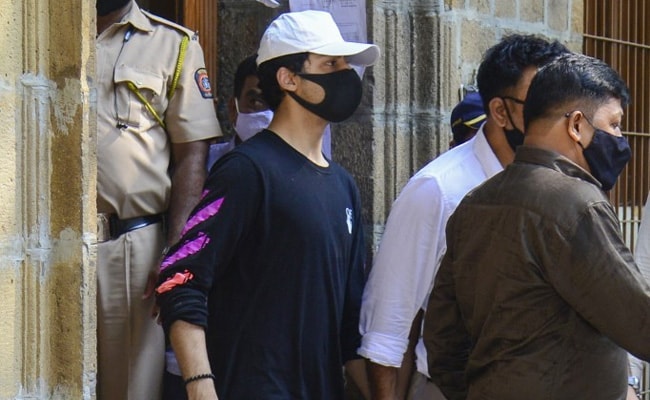 Megastar Shah Rukh Khan's son Aryan Khan was arrested on Saturday after a raid on a cruise ship.

Aryan Khan, the son of megastar Shah Rukh Khan, had no drugs on him when he was searched, the drugs-control authority Narcotics Control Bureau or NCB has told a Mumbai court. But his chats on WhatsApp were incriminating, which is why he needs to be thoroughly questioned, the agency said, arguing that the 23-year-old was supplied drugs by Archit Kumar, one of the other men arrested in the cruise ship drug bust.

Aryan Khan was arrested on Saturday after a raid on a cruise ship that was to travel from Mumbai to Goa. A total of 16 people have been arrested so far -- including those that helped organize the event.

In an earlier hearing, the agency told the court that WhatsApp chats of Aryan Khan, Arbaaz Merchant and Munmun Dhamecha had "shocking and incriminating" material that pointed to "international drug trafficking".

The agency had also claimed that in the chats, modes of payment for drugs were also discussed. "All the accused persons have to be confronted with each other. The international transactions need to be investigated," Anil Singh had said.

Today in court, Aryan Khan's lawyer argued that he was arrested "based on what they found on his mobile".

"There is a series of chats between me and Pratik Gaba but it does not refer to any rave party, they are investigating a rave party," said senior advocate Satish Manshinde, who was representing Aryan Khan.

"Before Aryan Khan could board the ship they wanted to search him. They asked if he was carrying drugs and he said no. They searched his bag and found nothing," said Mr Manshinde.

The 23-year-old said he was invited to the ship to "add glamour" to the party as a person linked to Bollywood.

Arguing that Aryan Khan also gave the name of Archit Kumar, leading to his arrest, Additional Solicitor General Anil Kumar told the court that it is a connected case.

"We have to establish the entire conspiracy and the deal. We cannot be segregating them. It cannot be done. The purpose of the agency is find out the real culprit and the entire gang. Or else it will continue forever. The entire chain will have to be screened," he added.

Mr Manshinde argued that knowing someone is not enough in such cases. "I know the ASG, that does not mean I am engaged in nefarious activities with him," he said.