Reports about tensions in the ruling coalition emerged after the home department's order of transfer of 10 deputy commissioners of police in Mumbai was rescinded. The Home portfolio is held by the NCP. 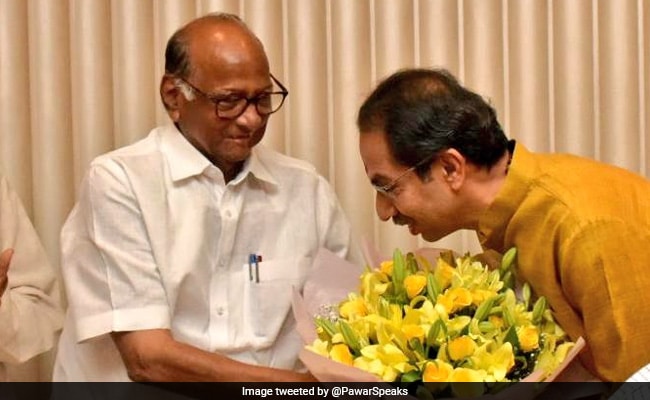 Sharad Pawar said he was happy with Uddhav Thackeray's performance as chief minister.

NCP chief Sharad Pawar said on Tuesday that he met Maharashtra Chief Minister Uddhav Thackeray to discuss issues of the state, and there was no bickering within the ruling Maha Vikas Aghadi (MVA).

Mr Pawar was speaking to reporters after a meeting with a traders' association in Pune.

Asked about his meeting with the chief minister at `Matoshree', Mr Thackeray's residence in Mumbai, on Monday, Mr Pawar quipped that newspaper reports about differences within the Shiv Sena-NCP-Congress alliance was news to him.

"There are no differences. The discussions with the CM were related to the issues that are before the state and there were no other issues," he said.

Reports about tensions in the ruling coalition emerged after the home department's order of transfer of 10 deputy commissioners of police in Mumbai was rescinded. The Home portfolio is held by the NCP.

Talking about the issue, Mr Pawar said transfers of IPS or IAS officers are being done with the chief minister's approval.

Asked about opposition BJP's jibes at Mr Thackeray for rarely stepping out of house, Mr Pawar said if a person with key responsibilities comes out, people come together and this should be avoided.

To a question, the NCP chief said he was happy with Mr Thackeray's performance as chief minister.

After taking over as Chief Minister, Mr Thackeray had plans to work on several issues, but priorities changed with the outbreak of coronavirus, he said.

Meanwhile, traders in Pune are in favour of decentralization and shift of businesses to the outskirts of city post-coronavirus, Mr Pawar said.

During the meeting, they demanded around 1,000 acres of land near Pune for trade and business sector, he added.