It is a bunch of letters that Bihar Governor Satyapal Malik wrote this week which have stunned Bihar Chief Minister Nitish Kumar and his party. 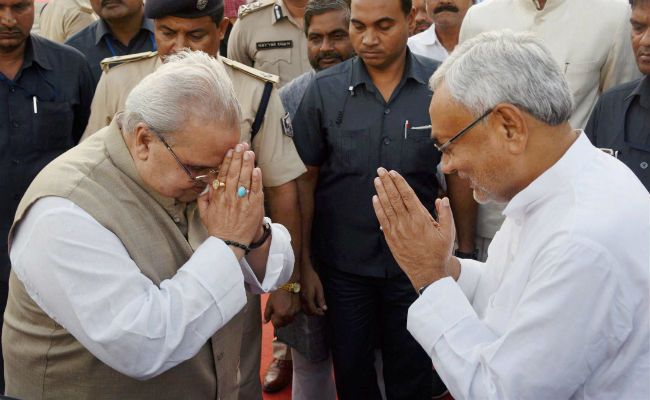 Satyapal Malik and Nitish Kumar have known each for decades

Tejashwi Yadav had been unsparing in his sharp attacks from day one. But Nitish Kumar's party Janata Dal United had been prepared for it. It was as big a scandal as it was tragic. Nearly three dozen girls, one as young as seven years, put up in state-funded home to shelter them from harm had been raped by the man put in-charge by his government. And there had been accusations that a husband of a minister from Nitish Kumar's party also had been involved. The JDU didn't expect Tejashwi Yadav to back down. He didn't and even took his protests to Delhi's Jantar Mantar on Saturday.

But it is a bunch of letters that Governor Satyapal Malik wrote last week which have stunned the chief minister and his party. Two of them were marked to Nitish Kumar and then, one each to the union law minister Ravi Shankar Prasad and the high court chief justice.

It is a huge embarrassment, a senior JDU leader told NDTV.

But there is a strong, and growing view within the party that the move did not originate in Raj Bhavan.

Satyapal Malik and Nitish Kumar have known each for decades, and had been in the Janata Dal led by former prime minister VP Singh around the same time, as friends. So to many it was not a surprise when Satyapal Malik had started his stint as Bihar governor with a warm hug to Nitish Kumar last year.

It is being speculated that it could possibly be payback time for all the occasions when Nitish Kumar read out the riot act to BJP leaders seen to be attempting to polarising politics in the state. Or quite simply, part of a concerted attempt to erode the credibility of the three-term chief minister, in most part due to his "Sushasan Babu" image.

A second JDU leader confirmed the assessment that the decision to nudge Raj Bhavan to pick up the pen had been choreographed and dictated elsewhere. It isn't the BJP in Bihar, he quickly added.

BJP leaders who are part of Nitish Kumar cabinet such as Sushil Modi are seen to be firmly supportive of the chief minister. Nitish Kumar, on his part, also reciprocates and acts in close consultation with them.

"Most probably the BJP headquarters in Delhi," the leader said.

The suspicion, he said, was confirmed when soon enough, a few television channels perceived to be close to the BJP, asked the BJP spokesperson why it wouldn't break up its alliance with the Nitish Kumar party.

The effort, JDU leaders, feel, was to project Nitish Kumar as a liability for the BJP.

JDU leaders, however, are not sure if this could be a long-term strategy or a one-off to pressurize Nitish Kumar to settle for a smaller share of seats for next year's Lok Sabha elections.