An overnight coup in Chirag Paswan's Lok Janshakti Party (LJP), led by his uncle, has left him isolated at the top with five of six MPs breaking away and writing to the Lok Sabha Speaker, asking to be treated as separate group.

Including Chirag Paswan, the LJP has six MPs in the Lok Sabha. The five rebel MPs want a new leader to replace Chirag Paswan, the son of party founder Ram Vilas Paswan who died last year. They will meet with Speaker Om Birla soon to formally ask for his removal as their leader.

The LJP revolt is led by Chirag Paswan's uncle Pashupati Kumar Paras, the younger brother of Ram Vilas Paswan. He has been elected as the new leader of the LJP parliamentary party.

In escalating drama in Delhi, Chirag Paswan drove to his uncle's house for talks, but stayed in his car. Mr Paras did not come out to greet him either.

"There are six MPs in our party. It was the desire of five MPs to save our party. So I have not split the party, I have saved it. Chirag Paswan is my nephew as well as party's national president. I have no objections to him," Mr Paras said this morning. "I am with the National Democratic Alliance (NDA). Nitish Kumar is a good leader and Vikas Purush (development man)," he added.

The split was inevitable; uncle and nephew were hardly on talking terms and used to communicate through letters. Sources say Mr Paras, a first-time MP from Hajipur, was promised a spot in the Union cabinet by Chief Minister Nitish Kumar, which sealed the deal. 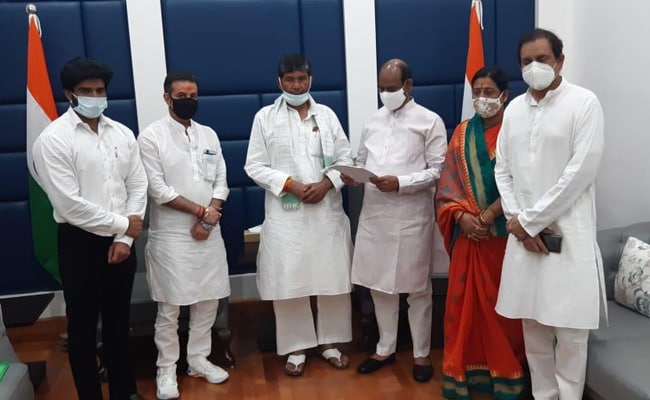 Nitish Kumar, sources say, had already been working on the rest of the LJP MPs through a party leader related to the Paswans - Maheshwar Hazari - and his close lieutenant Lalan Singh. The rebels, including Chirag Paswan's cousin Prince Raj, Chandan Singh, Veena Devi and Mehboob Ali Kaiser, may support the Chief Minister's Janata Dal United (JDU) in the coming days.

The Chief Minister's reported role in the LJP split has given it the "revenge-served-cold" twist. The LJP was a part of the NDA in Bihar, which includes the BJP and JDU, until last year when Chirag Paswan announced a solo contest for the state election. Chirag Paswan's decision to field his own candidates is believed to have inflicted the worst damage on Mr Kumar, whose JDU finished third in the Bihar polls, after the BJP and the opposition RJD.

The LJP's meltdown was, in fact, set in motion barely four days after Ram Vilas Paswan's death on October 8, when Chirag threatened to expel his uncle over a statement and reportedly declared: "You are not my blood."

Those close to Mr Paras say he felt insulted when his nephew did not bother to check with him about the party's candidates for the November assembly election.

For Chirag Paswan, another deep cut is the defection of his cousin Prince Raj, whom he had made LJP's Bihar president.

LJP insiders alleged that this was a crisis waiting to happen, mainly because of Chirag Paswan's perceived arrogance. "He never bothered to keep his promise of touring the state and interacting with the party workers, made just after the assembly elections," sources said.

Even when the LJP's only MLA joined Mr Kumar's party, Chirag Paswan refused to see the warning signs and didn't take reports of possible defections from his parliamentary party seriously, the sources say, adding that his "overconfidence and aloofness" cost him.