Nitish Kumar leaves for Islamabad after tour of Sindh province 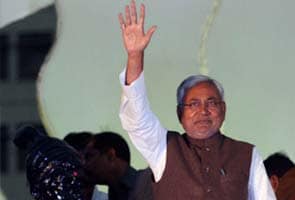 Karachi: Bihar Chief Minister Nitish Kumar on Monday flew to Islamabad after winding up a whirlwind tour of the Sindh province, saying that he is going to the capital with a stronger belief that Pakistan and India must work together for peace and prosperity in the region.

Mr Kumar flew to Islamabad after spending three hectic days in Pakistan's biggest city and the Sindh province, rounding off his tour by attending a reception hosted by Governor Ishrat-ul-Ebad.

In his brief address at the reception, Mr Kumar said he had come in close contact with Pakistani people during his tour and learnt a lot about the country.

"I am going to Islamabad with a stronger belief that Pakistan and India must work together for peace and prosperity in South Asia region as we share lot of common values and aims," Mr Kumar said.

Mr Kumar said he was happy to see that Indo-Pak ties were warming up at the provincial and parliamentary levels and said there was need for more exchanges of provincial heads.

"It is a positive development and we can learn from each other's experience of good governance," he said.

Mr Kumar, who is on a week-long trip to Pakistan, earlier in the day also met with a rotary delegation led by Shahnaz Wazir Ali who is special assistant to Prime Minister on social universities and chairperson of the Higher education commission to discuss the ongoing anti-polio campaign in the country.

Mr Kumar on the occasion pointed out that in his governance in Bihar, special attention was paid to the law and order situation and action is taken against criminals who were politically, socially and financially influenced.

On Sunday night, Mr Kumar also attended a dinner hosted by the Mutthaida Qaumi Movement (MQM) at their headquarters.

Promoted
Listen to the latest songs, only on JioSaavn.com
Mr Kumar, arrived in Karachi on November 9, will visit Islamabad and then Lahore during his week-long goodwill visit to Pakistan.