Tejashwi Yadav teared up and touched the feet of his Nitish "chacha", who has been projecting the 33-year-old RJD leader as Bihar's future 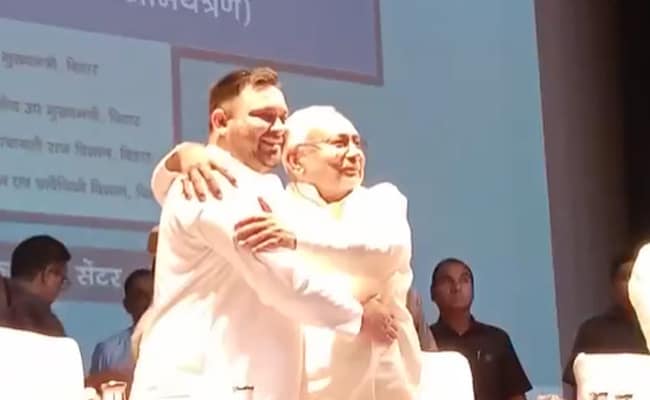 Holding his deputy Tejashwi Yadav in a tight hug for several minutes, Bihar Chief Minister Nitish Kumar today exhorted the crowd to cheer for him as a government event turned into a massive birthday greeting for the RJD leader, who turned 33 today.

Tejashwi Yadav teared up and touched the feet of his Nitish “chacha” (uncle), who has been projecting him as Bihar's future leader.

That future may not be too far as Nitish Kumar, 71, explores a national role for himself — leaving Bihar to Tejashwi Yadav — ahead of the 2024 Lok Sabha elections to challenge PM Narendra Modi and BJP's supremacy.

The bonhomie — witnessed today at a function to hand over appointment letters to new hires in two government departments — is not entirely new as Nitish Kumar is an old associate of Tejashwi's father, Lalu Prasad Yadav.

When the “chacha” and “bhatija” were on opposite sides, too, Tejashwi Yadav would keep the rhetoric strictly political. At one point he even took a mild scolding from the Chief Minister when making allegations as Leader of Opposition during an assembly session.

The public display of affection has, however, gone up several notches ever since Nitish Kumar dumped the BJP to revive his party JDU's alliance with the RJD earlier this year. There have been several visible cues, besides hints in public statements, that the JDU would be merged into the RJD.

A couple of hints appeared last month too.

“Ab isko badhaava dena hai (It's time for him to be pushed forward),” Nitish Kumar had told reporters, pointing towards Tejashwi Yadav.

The Yadavs' RJD is the majority partner in the Mahagathbandhan, the Grand Alliance, and the single largest party in the assembly.

Another hint of JDU merging into RJD came from a JDU poster on October 30, the 19th foundation day of the party. It spoke of development with “social justice”, which is the RJD's keyword in its positioning as a party of the historically oppressed.

Once together in the erstwhile Janata Dal, Nitish Kumar and Lalu Yadav are among a generation of leaders who emerged in the anti-Emergency politics of the 1970s and came into their own during the caste assertion in the 1990s.

When the Grand Alliance was first formed in 2015, the two Bihar leaders were keen to merge their parties into UP-based Samajwadi Party. But Mulayam Singh Yadav, then head of the Samajwadi Party, wasn't as keen.

Nitish Kumar walked out of the Grand Alliance anyway in 2017, only to return this year.