In December 2012, Akshay Singh and five others gang-raped and tortured a 23-year-old student inside a moving bus in south Delhi. She died a fortnight later

The young woman, a first-year medical student, was gang-raped and tortured

Akshay Kumar Singh, one of the four men convicted in the gang-rape, torture and killing of a young girl in Delhi seven years ago, on Tuesday filed a petition in the Supreme Court to appeal against his death sentence. While the act of filing a last-minute review petition - the four are expected to be hanged soon - is not unusual, the petition makes some rather bizarre claims, including citing Hindu religious texts and the Delhi pollution crisis as reasons why the death sentence should not be carried out.

In a 14-page Criminal Review Petition, filed by advocates on his behalf, Akshay Singh says: "Why death penalty when age is reducing... it is mentioned in our Ved, Purans and Upanishads that... people lived the life of thousand years... now it is Kalyug, in this era, age of human beings have reduced much. It has now come to 50-60 years... this is almost a true analysis... when a person faces stark realities of life, then he is no better than a dead body".

The petition goes on to say the air quality in the National Capital Region was "burst and like a gas chamber" and that the poor quality of drinking water - "full of poison". "Life is going short to short, then why death penalty?" the petition asked.

Finally, the petition quotes Mahatma Gandhi's famous advice to people faced with a difficult question - "Recall the face of the poorest and most helpless man..." 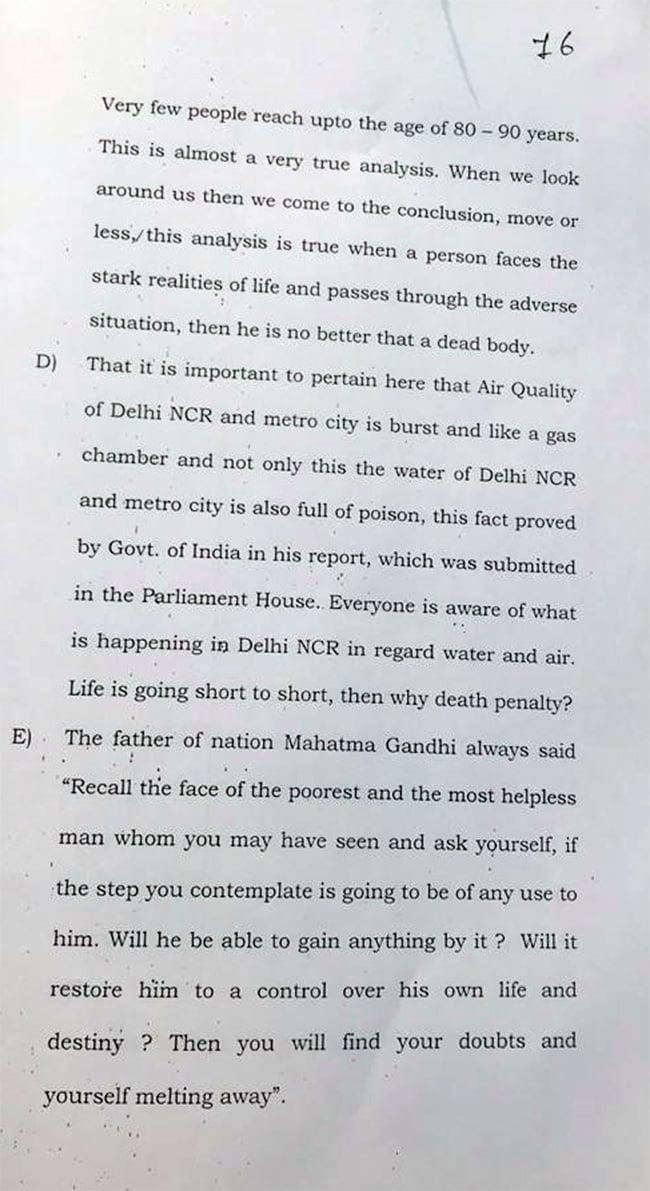 Akshay Singh, one of the four men who gang-raped and tortured the young girl, filed a review petition

Akshay Singh's review petition comes less than a week after the Delhi government and the centre rejected a mercy request by Vinay Sharma, another of the rapists. The courts have already rejected petitions from Vinay Kumar, Mukesh Singh and Pawan Gupta.

Once the relevant legal appeals are exhausted all four will be hanged at Delhi's Tihar Jail, where preparations are already being made.

In December 2012, Akshay Singh and five others, including a juvenile male, gang-raped and tortured a 23-year-old paramedic student inside a moving bus in south Delhi. She was violated with an iron rod when she protested. Her friend was beaten severely and both were thrown out of the bus at a secluded spot; the young girl was naked and bleeding. She died 13 days later at a hospital in Singapore, where she had been airlifted for treatment.

The case scarred the nation, made headlines across the world, triggering changes to laws dealing with sexual crimes against women. It also put the focus on the increasing number of crimes involving juveniles, bringing about changes that would see them tried as adults under specific circumstances.