Neither Netflix, two of whose top executives have been named in the FIR, nor the writer and crew of the series have reacted so far 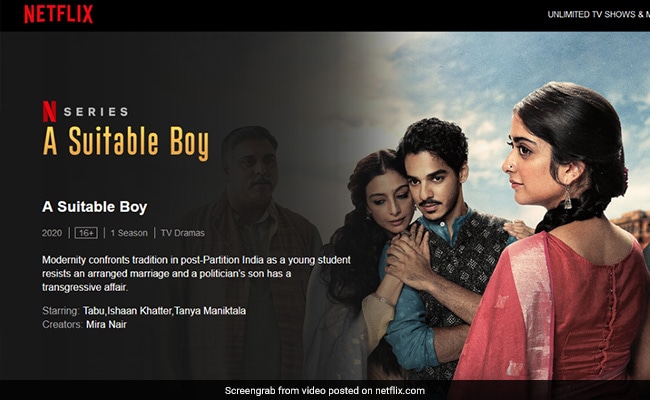 A FIR (first information report) has been registered against streaming service Netflix over allegations that the BBC adaptation of Vikram Seth's "A Suitable Boy" has hurt religious sentiments.

The scene that has drawn the ire of self-styled guardians of Indian culture shows a man and a woman kissing inside in a temple. The FIR was filed today by a BJP youth leader from Madhya Pradesh's Rewa district, who claimed the scene promoted "love jihad" - a right-wing conspiracy theory about relationships between Muslim men and Hindu women.

In the scene that prompted the complaint, the woman is Hindu and the man Muslim.

Gaurav Tiwari, the National Secretary of the Bharatiya Janata Yuva Morcha (BJYM), has demanded an apology and the removal of "objectionable scenes" that "encourage love jihad".

"Kissing scenes (filmed) inside a temple of Lord Maheshwar (a historic town located on the banks of Narmada) have hurt sentiments of Hindus. This is also encouraging 'love jihad'," Mr Tiwari said.

On Sunday Madhya Pradesh Home Minister Narottam Mishra said police had been directed to investigate. Today he said: "Prima facie after examination we have found that it hurts religious sentiments, so an FIR has been registered against Monika Shergill and Ambika Khurana."

Ms Shergill is Vice President (Content) for Netflix and Ms Khurana the Director of Public Policies.

Neither Netflix, the executives named nor the writer and crew of the series have reacted so far. The director, Mira Nair, told NDTV earlier that she was used to trolling.

"Love jihad" is a pejorative used by right-wing groups to target relationships between Muslim men and Hindu women, which, they say, is a ruse to forcibly convert the women.

Relationships between Hindu men and Muslim women are ignored.

It is a term not recognised by the centre. In February, the Union Home Ministry told parliament that "love jihad is not defined in law" and no such case had been reported by central agencies.

That, however, has not stopped a number of BJP-ruled states, including Madhya Pradesh and Haryana, from insisting they will push through "anti-love jihad" legislation.

The series was filmed in Maheswar district when the previous government - led by the Congress's Kamal Nath - was in power. Vijaylaxmi Sadho, the local MLA, had taken pictures with the crew.

The six-part Netflix series was directed by renowned filmmaker Mira Nair, who is known for her critically-acclaimed films such as "Salaam Bombay", "Monsoon Wedding" and "The Namesake".